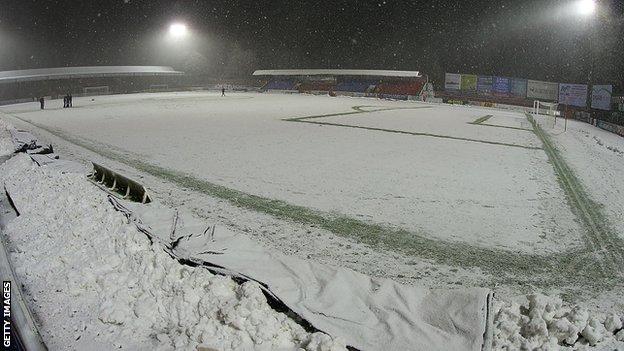 Fresh snowfall on the EBB Stadium pitch ahead of kick-off put the game in doubt, but referee Darren Deadman was happy with the state of the surface.

"I can't remember the last time I played in conditions near to that. The quality was terrible.

Conditions played a big part and we were unlucky

"Kick-off came and I didn't expect the game to finish. It's a wonder how we got through it," said Morris.

After the match, Shots boss Dean Holdsworth described the conditions as "very difficult", while Northampton manager Aidy Boothroyd said it had been "a proper old-fashioned game in ridiculous conditions".

Aldershot striker Danny Hylton, who missed the game through suspension, had helped the club's supporters and staff to clear the pitch and surrounds on Monday.

But further snow late on Tuesday afternoon had led Morris to expect a postponement.

Aldershot took an early lead in the game through Dani Lopez but the visitors went on to win the game 2-1.

"We got in around six o'clock and we were expecting the game to not be on, in all honesty," the 23-year-old continued. "(But) We had to get on with it.

"I don't want say it's good to get it out of the way as we would have liked to get a result, but conditions played a big part and we were unlucky."