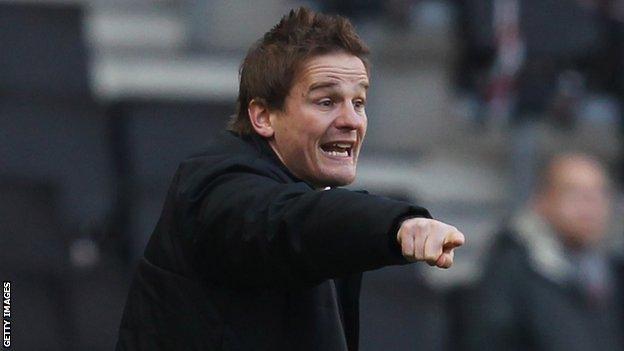 AFC Wimbledon manager Neal Ardley says he is still looking to add to his squad before the transfer window closes.

The Dons are in the League Two drop zone and Ardley has already brought in Peter Sweeney and Chris Hussey.

Ardley told BBC London 94.9: "We will keep trying to add and hopefully there may be one or two more.

"What we have got to consider is they have to be good enough to improve the squad and the dynamics of what we are trying to achieve."

He added: "If there are not [players in] by the end of January there is a week to wait and then there is the opportunity for loans.

"It's making sure the right players are available.

"One player that's available one week [then] isn't three weeks later and vice-versa.

"You've got to keep your ear to the ground the whole time."

Ardley says his hands are tied somewhat by both the fact they are fighting relegation and the club's playing budget.

"We are a small club, haven't got a massive financial budget wages-wise and are in a relegation dog-fight," he said.

"You are looking for that character who wants to come and is going to make a difference. They are not easy to find.

"Then there are people that will come but you can't pay them a king's ransom.

"It is tough but if we can get a couple more additions it will be a good January for us."

The Dons are unbeaten in three games in 2013 and Ardley says the side have benefitted from time on the training ground and in video analysis sessions.

"We have improved the results but we kept working hard through October and November trying to get the fitness levels higher," Ardley added.

"We feel we are fitter and stronger now than we have ever been during the season.

"We had a poor performance against Oxford over Christmas and we watched a bit of video footage and saw why.

"Since then the players have had that in the back of their minds. They have done the horrible side of the game really well and turned in some good performances."