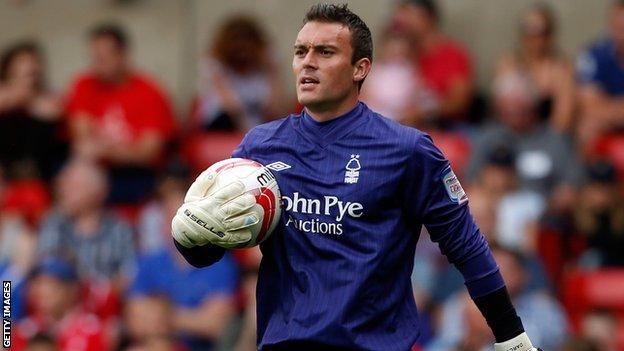 The 28-year-old was told by Forest earlier this month that he would no longer command a first-team place.

Subject to paperwork being completed, Camp arrives for his second spell at the club, until the end of the season.

"Any player wants to be in the Premier League and I'm very fortunate to be given this opportunity," he said.

He's a proven goalkeeper and he's at a good age. The deal until the end of the season suits all parties

"I'm delighted. It all came around pretty quickly and it turned out to be a pretty straightforward decision in the end. I'm really pleased to be here. Hopefully I can add to the experience and competition already here and challenge for a place in the team."

Camp, who has made 28 appearances for Forest this season after joining in 2009, spent time at Norwich in 2006 on a three-month loan deal where he made three appearances.

But this time will see him providing extra cover to the squad after the long-term injury to goalkeeper John Ruddy.

Norwich manager Chris Hughton said: "Lee will give us some really valuable experience alongside Mark Bunn with John Ruddy still out injured for a while.

"He's a proven goalkeeper and he's at a good age. He of course knows Norwich well having had a loan spell here a few years ago and the deal until the end of the season suits all parties.

"He will bring increased competition and will also allow us the chance to search for a loan move for Declan Rudd to get him some good first-team experience somewhere."