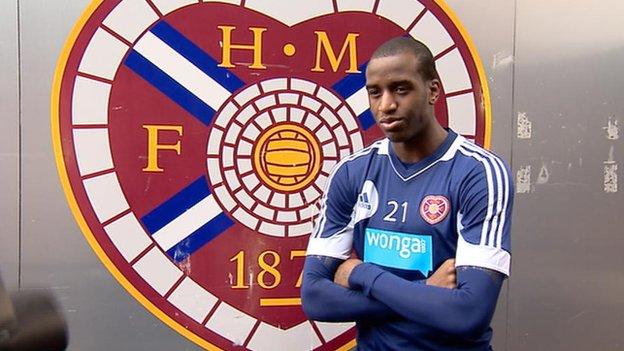 Hearts have signed Liverpool striker Michael Ngoo on loan until the end of the season.

Ngoo, who trained with the club on Friday, will go straight into the squad for Saturday's Scottish Communities League Cup semi-final.

Hearts take on Inverness at Easter Road for a place in the final.

"He could be something that Inverness hasn't bargained for," he said. "He could be a surprise package.

"I don't want to put too much pressure on him, it's not fair to think that he's going to batter every ball that comes into the box into the back of the net.

"However, we hope that he's going to improve our goal scoring tally."

Ngoo joined Liverpool from Southend in 2009 and has been capped for England at Under-20 level.

"He's come from a big football club," added McGlynn. "Liverpool paid a bit of money for him so they have high hopes for him.

"It was the priority position for us. I said last week that when there's a player like Danny Wilson, you can never have enough good players about. You take good players any time.

"It probably helped that Danny is now here as he obviously knows the lad, he spoke to Michael and gave good him a good report on the football club."