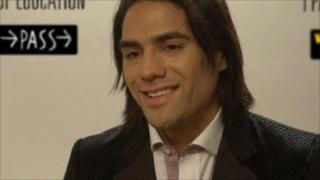 Falcao is a Premier League fan

Atletico Madrid striker Radamel Falcao says he is an admirer of Premier League football, describing the competition as having "a lot of significance worldwide".

The Colombian is one of the most highly-rated strikers in Europe, and expresses his admiration for Manchester United's Ryan Giggs - describing the veteran midfielder as an "elegant player".

Atletico are second in La Liga, eight points behind leaders Barcelona and seven ahead of their illustrious city rivals Real Madrid.

What The Hundred can learn from the Big Bash