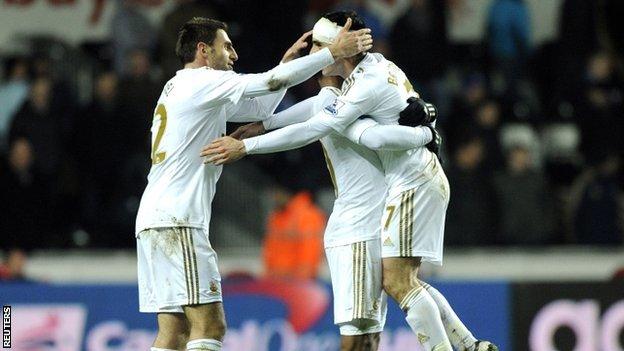 Having been in the league's bottom tier and close to extinction in 2001, they are now ninth in the Premier League.

"All difficulties can become opportunities, especially if you have visionaries around and I see Huw Jenkins as a visionary," Sousa said.

Swansea were saved by a supporters trust, which now owns 20% of the club, and were close to dropping out of the Football League in 2003.

Jenkins took over as chairman in 2004, eventually appointing a string of forward-thinking managers including Roberto Martinez and current boss Michael Laudrup.

And now they stand on the verge of European competition. Should they beat League Two side Bradford City in the Capital One Cup final in February, they will qualify for next season's Europa League.

Sousa, who replaced now Wigan coach Martinez and managed the Swans between 2009 and 2010, said the way the club is managed means they are are close to competing in Europe on a regular basis.

"In their project I don't think they ever thought of the Champions League but in reality if they keep doing how I expect, with the right decisions being made by Huw Jenkins, it is something that can be their next step," Sousa told BBC Sport.

"It's something already that they are competing with top clubs, who are financially quite strong and can bring in top players to win all these competitions. Swansea are a short step to compete internationally for [those players]."

Key to Swansea's success this season has been their star striker Michu, who signed from Rayo Vallecano for £2.2m last summer and has scored 13 Premier League goals this season.

But Sousa thinks they will struggle to hold on to the Spanish forward, despite the 26-year-old signing an extension to his contract, which now runs out in 2016.

"If he keeps that performance level it will be very difficult [to keep Michu]. But I'm sure they already have ideas to bring in other players which can help keep them competitive.

"They have the base of a football philosophy to sustain the capacity to be competitive [in the Premier League], and also in Europe."