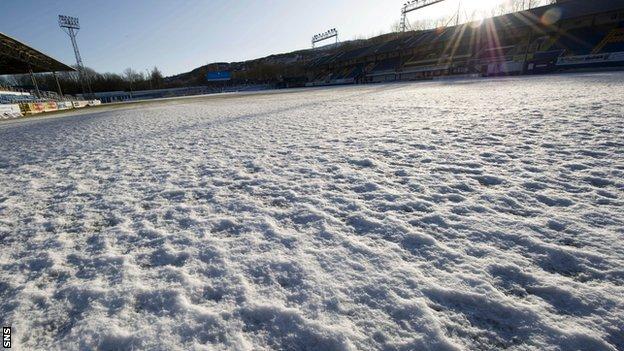 Three more Scottish Football League matches have been postponed due to bad weather.

Albion Rovers v Stenhousemuir and Brechin City v Queen of the South in Division Two had also been called off.

All five First Division matches are due to go ahead.

In the Second Division, Alloa Athletic's home game against Stranraer, Forfar Athletic's visit to Arbroath and East Fife v Ayr United are scheduled to be played.

Rangers' match against Montrose at Ibrox is the only Third Division game expected to be played, with Annan's match rescheduled for 29 January with a 19:30 kick-off.

Meanwhile, Forfar Athletic have asked local farmers to supply a tractor and trailer, as they have run out of room to put cleared snow.

The Loons' artificial surface at Station Park has been repeatedly cleared, but banks of snow now surround the pitch.

A Forfar spokesman said: "We now have a problem to overcome which is where do we put any fresh snow as there is no space left?"

Forfar's next scheduled home match is on 16 February.