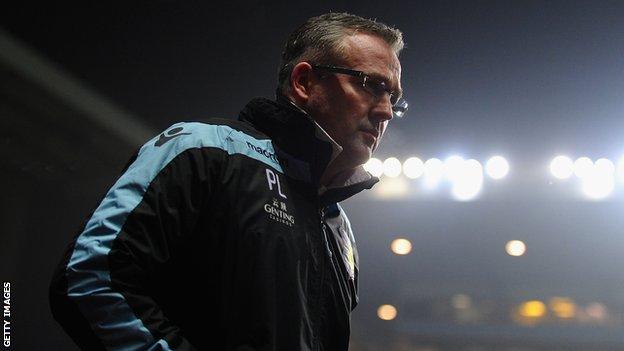 Aston Villa manager Paul Lambert says his side will remain united as they attempt to salvage their season.

Villa lost their Capital One Cup semi-final to League Two Bradford on Tuesday and are 17th in the Premier League, one point above the relegation zone.

BBC Sport understands that Lambert's job will be safe even if Villa, who visit Championship side Millwall in the FA Cup on Friday, are relegated.

"It's a big wheel and it always turns. No fan can be hurting more than me and we must win them back. No matter what happens, we must stick together."

Villa have managed four victories in 23 Premier League matches this season, winning none of their last six.

They have conceded 20 goals in those six matches, a run that began with an 8-0 defeat at Chelsea on 23 December.

Villa's hopes of getting to Wembley in the Capital One Cup were ended by Bradford, who secured a 4-3 aggregate semi-final win despite losing Tuesday's second leg 2-1 at Villa Park.

"If the unthinkable happened and Villa were relegated I think Lerner would still stick with Lambert," Murphy said.

Lambert said after Tuesday night's cup exit that he would fight on as manager.

Villa have the Premier League's worst defensive record, having conceded 44 goals this season, and Lambert has called for improvement.

"We defended well for three clean sheets out of four just a couple of months ago and we must get back to that," he said.

"The relegation issue doesn't frighten me. There'll be a lot of clubs worried about getting sucked into it. We won't shy away from the challenge."