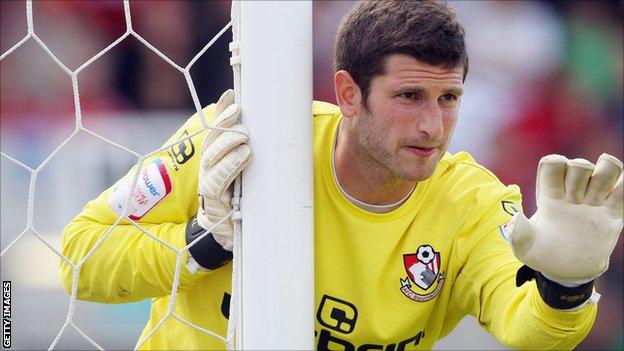 Bournemouth keeper Shwan Jalal says he is determined to hold onto his starting place after playing his first league game since September.

And Jalal, in his fifth season at the club, intends to keep Ryan Allsop and David James out of the side.

"My goal now is to stay in the team and help Bournemouth out," Jalal told BBC Radio Solent.

It was Jalal's 15th appearance of the season, and having previously lost his place to veteran keeper James, said he was "absolutely delighted" to be given another chance by manager Eddie Howe.

He took it like a man, he was disappointed but he is a team player

"It's a fantastic club to be at and I can't say how happy I am to be playing under the manager (Eddie Howe) and Jason (Tindall) and be training with Neil Moss every day," he said.

Howe admitted it was a tough decision to drop former England keeper James for Tuesday's game, but hinted Jalal was now his first-choice keeper.

"David has done very well for us, he has been a big part of our unbeaten run," said Howe.

"But we had to make a big decision, more based on distribution rather than goalkeeping and Jalal is an excellent footballer, as well as an excellent goalkeeper, so that's why we came to the decision.

"David is still very much part of our squad and I know he will be going forward.

"It's not like we've excluded him, we had to integrate Ryan also, and David will be helping us out with some coaching as well."

Howe added: "He is still part of the club but sometimes you have to make tough decisions.

"He took it like a man, he was disappointed but he is a team player and he wants to help us achieve our goal of promotion.

"There is no animosity, it was done with the best intentions."