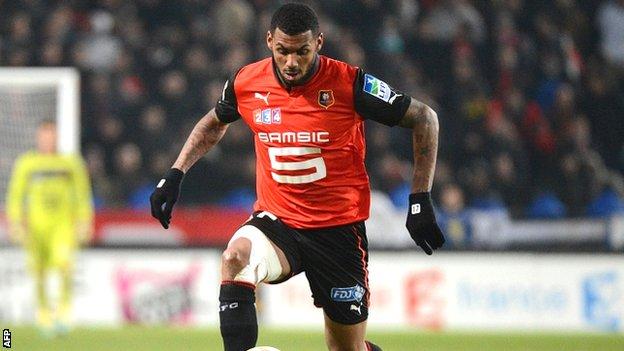 M'Vila was wanted by QPR and Fulham, while the previously unnamed English team keen to sign the 22-year-old France international were Everton.

But he has signed a four-year contract with Rubin worth £3.75m a year after tax, including a £16.6m buyout clause.

M'Vila passed a medical on Wednesday before finalising his move.

"I am glad that I have signed a contract with Rubin," he said. "The transfer is a new challenge in my career."

Rubin coach Kurban Berdyev added: "I am very glad that such player as Yann M'Vila will play in Rubin. He is one of the young and prospective European players, leading midfielder of the French Championship.

"We would like to mention that M'Vila's transfer negotiations were complicated, several European clubs were interested in this player."

Chief among those suitors was QPR, with boss Harry Redknapp saying the Hoops were the Frenchman.

They made a bid of £6.2m, rising to £6.6m if they avoided relegation, but M'Vila was the Premier League's bottom side

He preferred a move to Everton, who were also prepared to offer £6.2m rising to £6.6m but it may have been split into two payments - £3.3m in January followed in the summer by £2.9m or £3.3m if they qualified for the Champions League.

Fulham indicated in December they would be willing to pay £5.8m, but no formal offer was submitted, while PSG's interest arrived too late.

The situation was complicated by M'Vila's ban from representing France until June 2014 after an unauthorised night out while on Under-21 duty.

If the France Football Federation (FFF) were willing to reduce his punishment he may have pushed for a move to England or to stay at Rennes, where he was under contract until 2015.

But with the FFF maintaining its stance, M'Vila opted for a lucrative move to Russia and and will attempt to reignite his international career once the ban is lifted.

The English sides were suggesting a salary of around £2.5m a year, although an issue is Britain's current 50% tax rate. It is due to reduce to 45% in April 2013 but this still compares unfavourably to Russia.

Rennes's asking price last summer was almost £17m and they reportedly rejected a £28m bid from an English team a year ago.

However, a series of off-field problems have seen M'Vila's stock fall and the French outfit were determined to offload him in January.

He has made 16 league appearances this season and has helped Rennes to the French League Cup final.