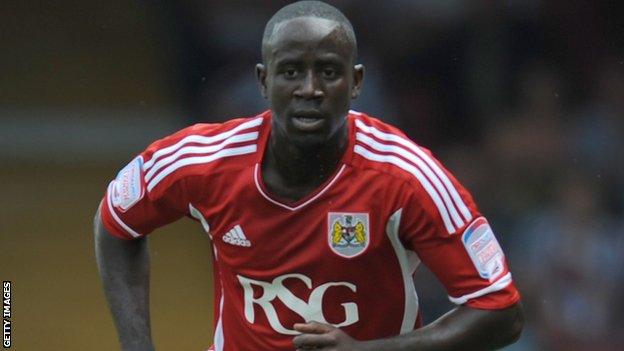 Bristol City have rejected a bid from an unnamed club for winger Albert Adomah and entered talks to sign Nottingham Forest's Brendan Moloney.

Adomah, 25, is currently on international duty with Ghana at the Africa Cup of Nations.

City paid a six-figure sum for the former Barnet player in 2010 and his current deal runs out next summer.

Irishman Moloney, 24, has been told by Forest he can find a new club during the January transfer window.

He worked under Robins head coach Sean O'Driscoll during his time as Forest boss earlier this season.

He's never let me down so I think he would be a good addition. Talks are at an advanced stage but it might be too soon for Saturday

O'Driscoll said he remains interested in the 25-year-old defender and could resume talks in the summer, but the player's current fitness is a concern.

"We've left it because the medical people have talked and there's some doubt whether he'll play again this season," said O'Driscoll.

"We're in a situation where the short term is more important than the long term. There's still an interest but I think it will be in the close season."

Regarding Moloney's potential move, O'Driscoll added: "We are talking to Brendan as we were aware he was available on a free transfer.

"He can play right-back, left-back and centre-back, and has played a lot of games in the Championship.

"He's never let me down so I think he would be a good addition. Talks are at an advanced stage but it might be too soon for Saturday."

Moloney has been at Forest since 2006 and has made 16 appearances so far this season.