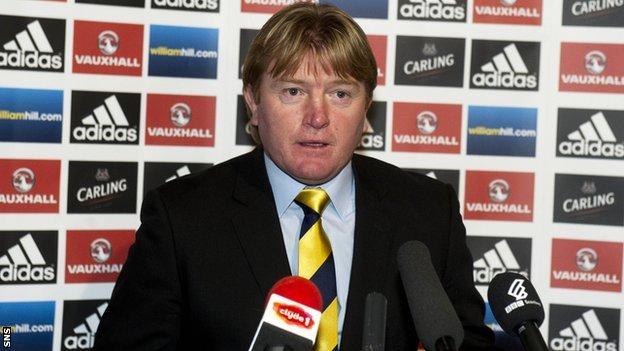 McCall made 40 appearances for Scotland as a midfielder and scored at the 1990 World Cup finals in Italy.

And now McCall has been added to the coaching set-up, with the 48-year-old saying he is "honoured" to be Scotland's new assistant coach.

"Anyone who knows me, other than my accent, I'm 100 per cent committed to Scotland," he said.

"I played against Gordon and came across him but I don't really know him that well, the same with Mark, but we had a good relaxed chat when we met up on Monday night.

"I never thought in my wildest dreams I would be anywhere near the national set-up and it came out of the blue.

"I'm thrilled to be given the opportunity to work with good players and to be involved in the set-up.

"And not only that, to work under both Gordon and Mark, who are both experienced managers and coaches, it will benefit myself, and seeing good players up close, even the opposition as well.

"I'm enthusiastic and passionate, certainly about my football and especially anything to do with Scotland."

Strachan has signed a contract that will cover the remainder of the current World Cup qualifying campaign and the Euro 2016 qualifiers.

"He was passionate and combative but he was also hugely influential and inspirational," Strachan the Scottish Football Association website.

"I am excited about working with Mark and Stuart and I am sure the players will benefit from their coaching experience."

Fir Park chief executive Leeann Dempster says the club are "delighted that Stuart's success with Motherwell has been recognised by his invitation to join the Scotland national team coaching staff".

"We are sure his experiences of international football will complement his excellent contribution to Motherwell's ongoing ambitions," she added.