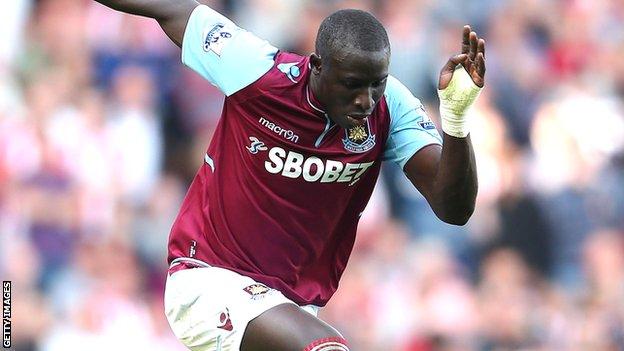 West Ham midfielder Mohamed Diame says he wants to stay at the club despite being linked with a move elsewhere.

Arsenal are among the clubs reported to be interested in signing the 25-year-old Senegal international.

But he said: "I know there are people out there saying things about me but I have spoken with the manager and told him I want to stay here.

"I know the club want to keep me too so I will continue to give my best for them. I'm very happy at this club."

Diame arrived in England when Wigan signed him from Rayo Vallecano on a three-year deal in 2009.

He scored seven goals in 103 games before last summer on a three-year contract that reportedly includes a £3.5m buyout clause.

"I knew when I signed that West Ham were going to make their mark on the Premier League," Diame said of the Hammers, who were via the play-offs last season.

"Since I came here I am enjoying every game I play on the pitch."

West Ham boss Sam Allardyce added: "Mo Diame has not been to me and said he is unhappy in any way.

"We've had no bids from any of the clubs that have been rumoured in the papers. He's our player and hopefully come 1 February he will still be our player.

"Players become unhappy by rumours that are spread. In the build-up to the transfer window, I spoke about the one thing that can upset your players is speculation that people want them.

"They think it could be the club talking about them in the press but it isn't. All I can say is that there have been no bids from clubs that I've seen in the press like Arsenal or Tottenham for Mo Diame."