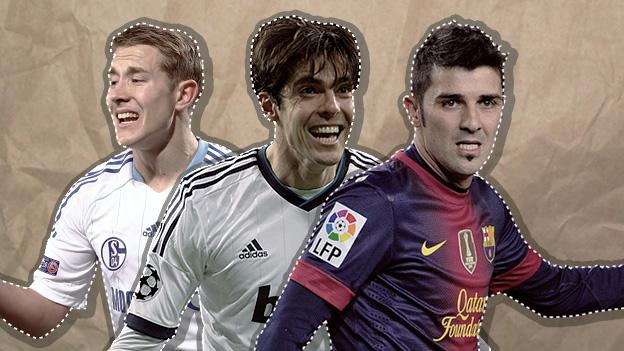 The January transfer window closes on Thursday, bringing to a close a frantic month of activity across Europe.

Our European writers explain what has happened across the continent so far in January, and what we can expect over the next few days. They will also be contributing to our transfer deadline day live text commentary, which starts at 08:00 GMT on Thursday.

The transfer window in France closes at midnight.

However, there have been no further big-money recruits in France as Ligue 1 teams continue to feel the pinch. Indeed, the priority for most this month has been offloading certain high earners.

In this respect, Newcastle and Queens Park Rangers have proved willing allies. While QPR paid £8m for France forward Loic Remy, who scored just one goal in 14 outings for Marseille this term, the Magpies have swelled their French ranks with the addition of five players.

Elsewhere, PSG have allowed Nene to join Al-Gharafa (Qatar) and sold Guillaume Hoarau to Dalian Aerbin (China) - and there should be more Ligue 1 departures in the coming days. St Etienne have reportedly turned down an approach from Newcastle for striker Pierre-Emerick Aubameyang, Marseille midfielder Morgan Amalfitano is being linked with QPR, and Juventus remain keen on Lyon forward Lisandro Lopez.

Meanwhile, cash-strapped Lyon have also agreed a fee with Schalke for Michel Bastos, with the German club agreeing to sign the Brazilian winger after Tottenham agreed to buy Lewis Holtby this week rather than the summer.

The transfer window in Germany closes at 18:00 GMT.

Bundesliga clubs traditionally avoid doing too much business in January, for fear of looking ill-prepared or even desperate mid-season.

This year, has seen more action than usual, however. Bayern Munich, as you might have heard, kicked things off by getting the man all top clubs coveted. Highly-rated Mainz defender Jan Kirchhoff, 22, will be plying his trade at the Allianz Arena (along with a a certain Pep Guardiola) come July.

Champions Borussia Dortmund, meanwhile, sold midfielder Ivan Perisic for £6.9m to Wolfsburg. That deal paved the way for Liverpool reject Nuri Sahin's much-cheered return, on loan from Real Madrid until 2014. The Turkish international will provide more depth to the squad.

Tottenham, by contrast, will be guaranteed to get all 5ft 9in of Lewis Holtby after Schalke agreed to release the Germany Under-21s midfielder - who had signed a contract for July - immediately, for a fee of £1.5m. His intended replacement, Lyon midfielder Michel Bastos, is about to have a medical in Gelsenkirchen.

The transfer window in Italy closes at 19:00 GMT.

Oh, the intrigue. So much of the attention in the final days of the transfer window in Serie A falls on the Milan clubs.

After selling Wesley Sneijder to Galatasaray last week, Inter expect Philippe Coutinho to complete a move to Liverpool. Only then, with the money in the bank, will they decide on making another bid for Corinthians' midfielder Paulinho.

Although Manchester City have denied it, Milan are thought to be close to bringing Mario Balotelli, a childhood fan of the club, back to Italy, with a reported £17m deal to be paid in instalments. He would replace the departed Brazilian Alexandre Pato, who has left after five years at San Siro, the last couple of which have been marred by no fewer than 16 separate injuries.

Pato joined Corinthians, the Club World Cup champions earlier in the month and hopes to resurrect his career and make the squad for the 2014 World Cup in Brazil. If Balotelli were to succeed him at Milan, it could apparently provoke a string of other moves in the summer with La Gazzetta dello Sport claiming that Napoli have begun their own succession planning in the expectation that City will try and replace Balotelli with Edinson Cavani in the summer.

Milan are also said to still be in negotiations with Real Madrid for the return of Kaka while elsewhere, Juventus have announced that Athletic Bilbao striker Fernando Llorente will join on a free in the summer.

A stop-gap has been found in the meantime with Nicolas Anelka arriving for a medical ahead of a six-month loan from Shanghai Shenhua, while talks for Lyon's Lisandro Lopez also continue. The surprise of the window so far - and what a good one it was too - was Fiorentina signing Giuseppe Rossi from Villarreal for £8.1m ahead of his long-awaited return from a serious knee injury in March.

The transfer window in Spain closes at midnight.

It's been a quiet transfer window so far in Spain, reflecting the fact that the majority of clubs are burdened with heavy debts and can't afford to make new signings.

The biggest move has been Real Madrid's recruitment of goalkeeper Diego Lopez for a reported £3m from Sevilla. Lopez was signed on Friday after Iker Casillas suffered a hand injury which will keep him out for up to three months, meaning he'll miss both legs of the Champions' League tie with Manchester United.

Another major deal is one that won't take effect until June. Athletic Bilbao striker Fernando Llorente, who was wanted by numerous Premier League clubs, has agreed to join Italian champions Juventus on a free transfer when his contract expires. It's unlikely that the move will be affected by the knee injury suffered by Llorente in training last week.

One story to look out for is whether Kaka will leave Real Madrid for AC Milan. He's been a fringe player under Jose Mourinho and both clubs want the deal to happen, but the Brazilian's huge wage packet is the stumbling block.

There's also the possibility that Arsenal may test Barcelona's desire to keep hold of David Villa. The 31-year-old has been frustrated by his lack of playing time but Barca's hierarchy have repeatedly insisted they will not allow him to leave, and the striker will perhaps be placated after being given a full 90 minutes for the first time in the league this season against Osasuna on Sunday.

Highly-rated Malaga midfielder Isco - reportedly a target for Chelsea and Manchester City - also appears to be staying in Spain for now after agreeing a new contract on Monday.

Aston Villa defender Alan Hutton has joined relegation-threatened Mallorca on loan until the end of the season, while Real Betis midfielders Benat and Jose Canas - who is heavily linked to Swansea - are attracting plenty of attention.

The transfer window in Austria, Belgium, Denmark, France, Greece, Holland, Slovenia and Turkey closes at midnight, in Portugal it is at 22:00 GMT.

Nobody is suggesting that the Premier League's financial domination of European football is over just yet, but January's transfer window has shown that some of the continent's emerging powers are ready to challenge it.

Wesley Sneijder ended months of speculation to sign for Turkish side Galatasaray for £8.4m

There is no pressure on the giants of Russia and Ukraine to tie up purchases by the middle of this week; their own transfer windows are open until the end of February and the start of March respectively.

Turkey should see some action. Following the completion of Wesley Sneijder's protracted move to Galatasaray, the Turkish champions may have another few stars up their sleeve.

English clubs might consider some last-minute reinforcements from Portugal or the Netherlands. QPR remain keen on Porto centre-back Rolando, while Newcastle and Norwich have looked at Sporting Lisbon striker Ricky van Wolfswinkel.