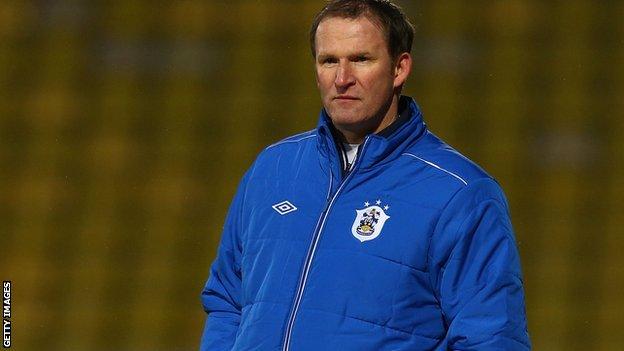 Huddersfield Town have sacked manager Simon Grayson after going 12 games without a win in the Championship.

The 43-year-old led the Terriers to promotion from League One via the play-offs last season after taking over from Lee Clark in February 2012.

"In making this decision, we have thought long and hard," chairman Dean Hoyle told the club website.

"It has been made with both the short term and long term needs of the club in mind. We brought Simon in with the immediate aim to lead the club to promotion and he did that at the first attempt. It is an achievement for which we are grateful.

"We knew the transition to Championship football would be difficult and our targets for this season have been realistic, with retention of our status the priority.

"However, having worked so hard to get back into the second tier we have to do everything we can to consolidate that position. After exceeding all our expectations in the early part of the season, our results and performances as a team and from individual players have tailed off alarmingly."

BBC Radio Leeds understands that the club have not made an approach to former Southampton boss Nigel Adkins or anyone else at this point.

Simon Grayson is the 32nd manger in the top four divisions to move on this season.

Town's last league win came at Barnsley on 10 November and they lost 4-0 to Watford on Saturday in what proved to be Grayson's final match.

The former Leeds boss was a surprise appointment on 20 February last year, having only been sacked from his position at Elland Road three weeks earlier.

He took the club up to the second tier after an 11-year absence with a penalty shoot-out victory over Sheffield United in the play-off final.

The Terriers made a bright start to life in the Championship and were sixth after their last win, but their current run of form has seen them drop to 18th, seven points above the drop zone.

They are the 11th Championship club to change manager since the start of this season.