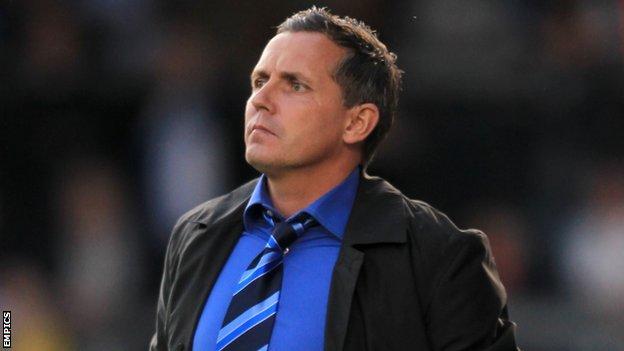 Luton Town boss Paul Buckle has said his friendship with Norwich counterpart Chris Hughton will be put on hold in Saturday's FA Cup fourth round tie.

Buckle played with Hughton at Brentford and was also a team-mate of Canaries coach Paul Trollope at Torquay.

"Knowing Chris like I do - and Paul - I don't think they'll underestimate us at all," he told BBC Three Counties Radio.

"We're good friends but I'm sure at three o'clock it will be put aside as he will be desperate to go through."

Hughton, 54, a former Newcastle United and Birmingham City manager, finished his playing career at Brentford between 1992 and 1993 at the same time as Buckle was starting out in the game at Griffin Park.

The Hatters and Canaries

And the pair come face to face this weekend as Buckle's Blue Square Bet Premier side try to cause a major upset at the Premier League club's home ground.

"We go back to Brentford where I started my career. Chris came in as a senior pro and was a good leader, a good professional," said 42-year-old Buckle.

"It's no surprise to me that he's gone on to do really well in management."

But that feat would be overshadowed if they can defy the 85 places on the English football ladder between the sides and overturn Norwich on their own patch.

"We need to contain Norwich early in the game. If we concede early it will make life very easy for them," said Buckle

"We did that well against Wolves. And we will have to perform to our highest levels and hope Norwich don't.

"My focus is on us doing our jobs on the day and staying in the game. If we do that we'll give ourselves a chance."

Meanwhile, Buckle has said he has had an offer for Bury winger Marcus Marshall turned down.

"We were in for Marcus but nothing has come to fruition," he said.

"At the moment it's pretty much dead in the water. The bid was accepted, contrary to what some people were saying.