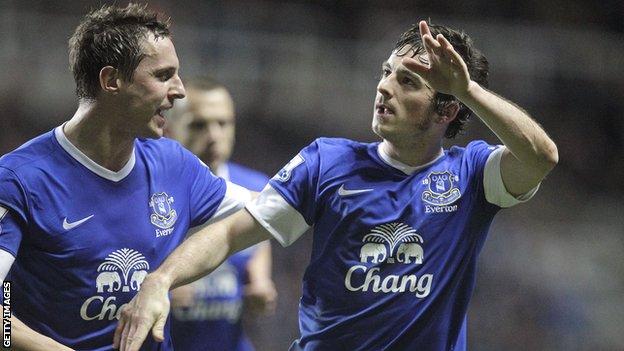 Leighton Baines says Everton are desperate to put their past FA Cup failures behind them and end the club's 18-year wait for a trophy.

The Toffees were runners-up to Chelsea in 2009 and

"It's the best route for us to win something, as you can see from the line-up in the last round. The manager played a strong team (at Cheltenham)," Baines told BBC Radio Merseyside.

Everton travel to Bolton in round four.

Baines continued: "The Cup runs were great for us and something we thoroughly enjoyed. It was just disappointing that we didn't end up with some silverware.

"It's there for the taking if you can keep winning. That's all you've got to do in the Cup. It's not always about the performance - it's all about winning."

The England full-back started the third-round victory at Whaddon Road, scoring in a

And he is expected to be involved again at the Reebok Stadium on Saturday, as David Moyes's side continue their quest to end Everton's trophy drought, which stretches back to their FA Cup success in 1995.

The 28-year-old continued: "Cheltenham was a potential banana skin but we dealt with it. Bolton are just out of the Premier League so it's going to be more of a level playing field.

"It's still going to be a very tricky game. Cup games are tough and we've seen that in the last few nights in the other cup competition [Swansea and Bradford reaching the final of the Capital One Cup]."

And Baines also believes it is positive to see players committing their futures to the Toffees, after on Thursday, after Phil Jagielka and Seamus Coleman extended their stays at Goodison Park.

"He [Distin] is one of the best professionals I've worked with," said Baines, who is "He's still playing at the top of his game when some people would be starting to fall away.

"It's good for the club to get people signed up, especially such important players. 'Jags' and Seamus Coleman have signed long-term contracts and they're all as good as new signings."