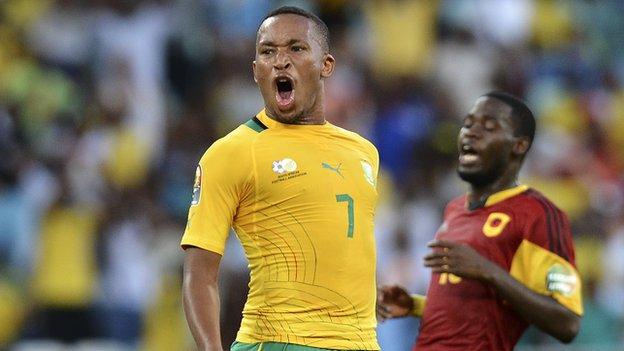 South Africa goal hero Lehlohonolo Majoro will miss Sunday's crunch Group A match with Morocco after injuring himself in the 2-0 win over Angola.

The striker, who scored Bafana Bafana's second goal on Wednesday, suffered a cut on his shin that required stitches.

"I'm going to miss maybe a couple of games," he said after the win that took the hosts of the Africa Cup of Nations to the top of Group A.

"The medical staff said I may miss the next game or two."

He added: "I have seven or so stitches in my leg."

Majoro came on after 58 minutes against the Angolans and needed only four minutes to find the back of the net.

However, he was then stretchered off late on after colliding with opposing goalkeeper Lama.

He is the latest addition to the injury list for South Africa coach Gordon Igesund, who was already unable to field midfielders Kagiso Dikgacoi and Lerato Chabangu for Wednesday's game.

The 1996 champions need a draw against Morocco on Sunday to be sure of reaching the knock-out stages.

Meanwhile, the North Africans earned their second straight draw on Wednesday, tying 1-1 with Cape Verde, and have to beat Bafana Bafana in Durban to have any chance of making the quarter-finals.

"We have to win against South Africa if we want to go through," Morocco's Aston Villa midfielder Karim El Ahmadi told BBC Sport.

The Atlas Lions entered these finals looking to put last year's disappointment behind them, when they exited the competition in the group stages.