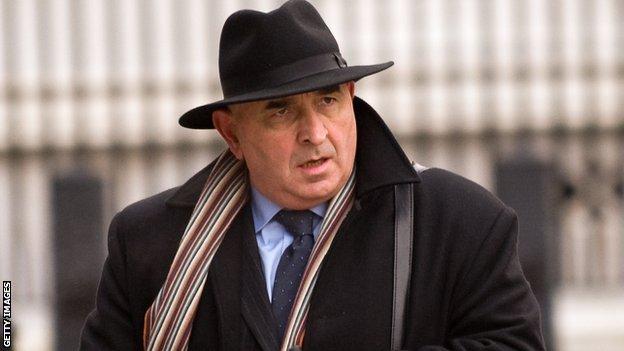 Swindon Town chairman Sir William Patey will quit the League One club once new owners have been found, BBC Wiltshire has learned.

The former British ambassador replaced Jeremy Wray in the role in October.

It was confirmed last week that current Swindon owner Andrew Black was no longer willing to invest and the club was up for sale.

Town have been in talks with several interested parties and they hope to conclude a deal by the end of January.

Earlier this week, former chairman Andrew Fitton said he would consider returning to the promotion-chasing Robins if new owners were found.

Fitton was part of a consortium involving Black, Wray and Sir Martin Arbib, who took over Swindon in 2008 and saved the club from going under by paying off a £900,000 bill to HM Revenue & Customs.

He resigned in 2011, following their relegation to League Two, and was replaced by Wray.

It was Wray who orchestrated the appointment of manager Paolo Di Canio and he was known to have a close relationship with the Italian.

Di Canio was given substantial funds by the board to add to the squad and it paid dividends as he led Swindon back to League One as champions last season.

They now sit fourth in the table, with a good chance of achieving back-to-back promotions, but their financial situation has dominated headlines in recent months.

Patey was brought in to replace Wray just a week after a transfer embargo was placed on the club, enforced by the Football League for overspending on wages and fees.

The embargo was removed a month later but Patey said there was "no money" available for Di Canio to make signings in January.

It is thought Swindon have debts totalling about £13m, and the club have considered entering administration in a bid to wipe £9m owed to investors, including Black and Fitton.