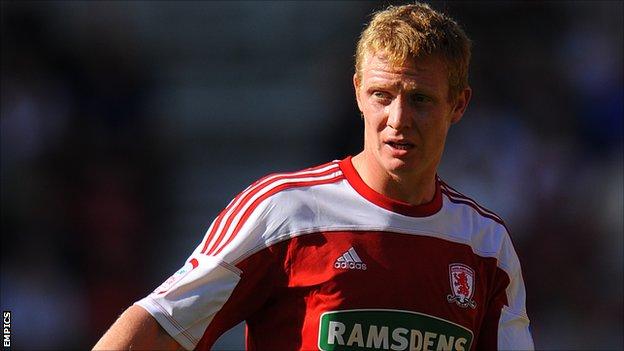 Middlesbrough boss Tony Mowbray has dismissed a return for Barry Robson despite allowing the Scotland midfielder to train with the club.

Robson, 34, left Teesside at the end of last season to join Vancouver Whitecaps but departed the Major League Soccer club at the end of their campaign.

"We're facilitating Barry to come and train but when players leave we replace them," Mowbray told BBC Tees.

"He's here to train, to keep fit. He might be here for a few days or weeks."

Mowbray continued: "We have to build a squad, and we have done - if anything we have a few too many players at the moment."

The former Celtic and Dundee United midfielder was a popular figure at the Riverside, making 90 appearances and scoring 19 goals, in addition to the 2011-12 Supporters Player of the Year award.

However Mowbray has admitted his hands are tied with regard to new additions.

"We're not looking to add other players and yet the job is always to improve the squad and if we can bring in better than what we've got then you should do it," he said.

"At the same time we can't keep increasing budgets and adding salaries on top of other salaries.

"The phone isn't ringing for our players at the moment and it is difficult to find a space for any footballer at the club at the moment."