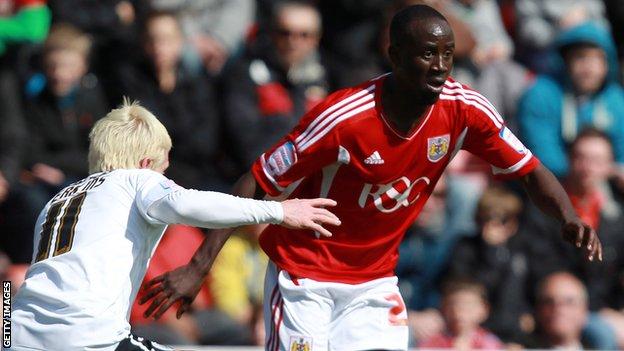 Bristol City's Albert Adomah says his future is in the club's hands after they turned down a written offer for the winger.

The bid, from an unnamed club, was confirmed by the Robins while the 25-year-old was playing for Ghana in the Africa Cup of Nations.

Speaking after their 1-0 win over Mali, Adomah told BBC Sport: "It's not down to me whether they let me go.

"At the moment I'm happy at Bristol City. It's in the club's hands."

He added: "I haven't heard of any request. I think they're letting me concentrate on the cup.

"I wish them luck for their game at Ipswich and hopefully they'll do well."

A former non-league player with Harrow Borough, Admoah joined City from Barnet in July 2010 for a six-figure fee, becoming the first signing for then manager Steve Coppell.

The London-born midfielder has since made 121 appearances, scoring 15 goals, and signed a contract extension last summer to keep him at Ashton Gate until 2014.

Admoah has yet to feature under new City head coach Sean O'Driscoll, who was appointed on 14 January, but is due to return to his club next month.