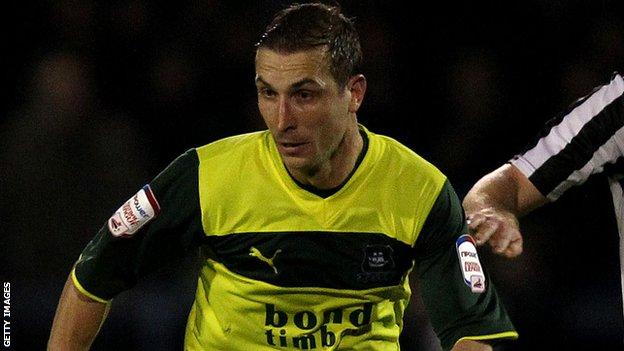 Plymouth Argyle have told Welsh striker Rhys Griffiths that he is free to leave the League Two club.

New manager John Sheridan says the 32-year-old, who is not part of his plans.

Despite being a regular goalscorer in Welsh football, has not fared as well in England.

He has scored just three goals in 17 appearances for Argyle, the last of which came on 13 October.

"He's come from non-league and he's had an opportunity here under a previous manager. I look for different strikers," Sheridan told the club website.

"I was just honest with Rhys and I explained to him that I won't stand in the way of another club, or he can find football elsewhere.

"I'm going to look at other things and I'm going to go the way I think will hopefully get us out of the position we're in.

"Hopefully it will give him the opportunity and enough time to look for football elsewhere.

Griffiths time at Argyle was hindered by a calf injury that he picked up in pre-season, meaning he had to wait until the start of September to make his debut.

He scored in his first game for the Pilgrims in a 3-2 win at Northampton Town, but then did not feature again for a month after being hurt in the match.

He started just seven games in total for Plymouth, the last being the 1-1 draw at Accrington last month.