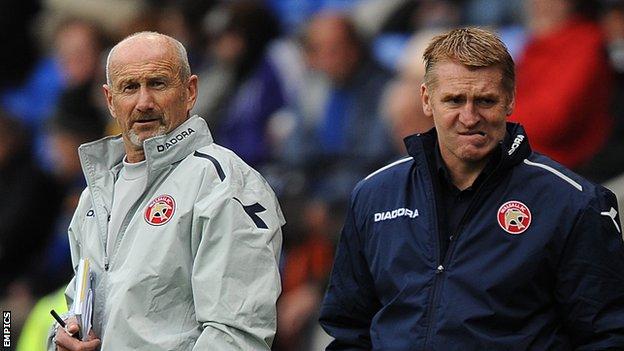 Smith made O'Kelly his number two at the Banks's Stadium during the summer.

But this week 56-year-old O'Kelly left to join new Robins boss Sean O'Driscoll, whom he worked with at both Bournemouth and Doncaster Rovers.

I think it's quite an appetising job at the moment, particularly with our form and what we are trying to do as a football club.

"I wanted to keep him and we had hours on end discussing it. I understand his decision but I'm disappointed he's gone," Smith told BBC WM.

"I've learned a lot while working with him and I hope he's learned a little bit from me as well, but we have to move on.

"What he's helped me do is that he has set an environment and a culture that the players can go and get better, and we shall continue that in the future."

The Saddlers are currently on a run of one defeat in their last eight matches, which has seen the climb to 10th in League One.

And Smith believes that his players will cope with the loss of O'Kelly to the Championship's bottom club.

"I broke the news to the players on Tuesday at training," he said. "I think players now see so many coming and goings and they'll take it in their stride and look forward.

"I think it's quite an appetising job at the moment, particularly with our form and what we are trying to do as a football club."