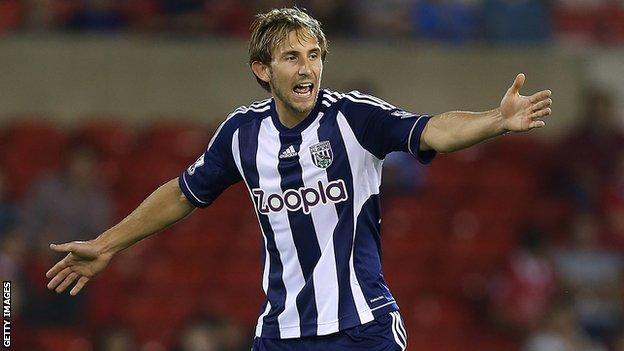 Dawson will remain with the Championship club until 27 April.

However, the 22-year-old will be unable to feature for Bolton against Everton in the fourth round of the FA Cup on Saturday, as he played for Albion in the third round at QPR.

Dawson, who joined the Baggies from Rochdale in August 2010, has not played a Premier League game this season.

His three appearances for the Baggies in 2012-13 have all come in cup competitions, but he has been a regular in Stuart Pearce's England Under-21 side since making his debut at that level in September 2011, winning a total of 10 caps.

He was also included in Team GB's 18-man squad for the London 2012 Olympics.

Dawson becomes the third new arrival at the Reebok Stadium during the transfer window.

for an undisclosed fee, believed to be in the region of £300,000, while Slovak youngster Jan Gregus joined on loan from Banik Ostrava.

Manager Dougie Freedman told the club website: "Craig had four or five different options and it is good news that he wants to come and play for us.

"When I spoke to him, he indicated that he was very keen to come here. He made the decision - and fair play to West Brom for letting him make that decision - because he wants to come to a club where he feels he can improve."

Meanwhile, Bolton have also rejected a bid from Fiorentina for left-back Marcos Alonso.