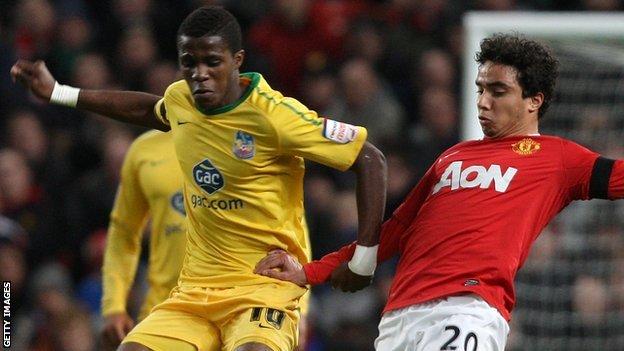 Wilfried Zaha says he is delighted at his summer move to Manchester United but insists his "focus" remains on winning promotion with Crystal Palace.

The 20-year-old winger has agreed a five-and-a-half year deal but will be loaned back to Palace until the summer.

Zaha said: "I am delighted to be joining Manchester United. However, my focus for the next five months will be solely at Crystal Palace."

United will pay £10m up front, with an extra £5m in additional fees.

The two clubs confirmed they had reached an agreement on Friday morning, with Palace also announcing they expect the move to be finalised next week.

The skilful wide-man has already agreed personal terms with the Premier League leaders and will now undergo a medical in Manchester.

"We like to sign players with potential," manager Sir Alex Ferguson said. "We develop players and that's been proven many times. Hopefully the boy enjoys it here."

Zaha joined Palace as a 12-year-old, and could be in line to win his second England cap against Brazil in February.

He has excelled since making his debut for the Selhurst Park outfit in March 2010, scoring 15 goals in 124 appearances and being named the Football League Young Player of the Year last season.

"I have been at Palace for more than 10 years, I will always love the club and I want to help get them back to the Premier League, particularly for the fans who have always been so good to me," Zaha added.

Palace are currently fourth in the Championship table, two points behind Leicester who fill the last automatic promotion place.

Co-chairman Steve Parish had always insisted Zaha would not leave the club on a permanent basis in January and he expressed his delight with the terms that will see the attacker continue to play a pivotal role in their bid to reach the top flight.

He said: "I feel this is a great deal for the club and the player. It was essential to Wilf and ourselves that he stayed at Palace for the remainder of this season to help the club with its main aim of promotion to the Premier League."