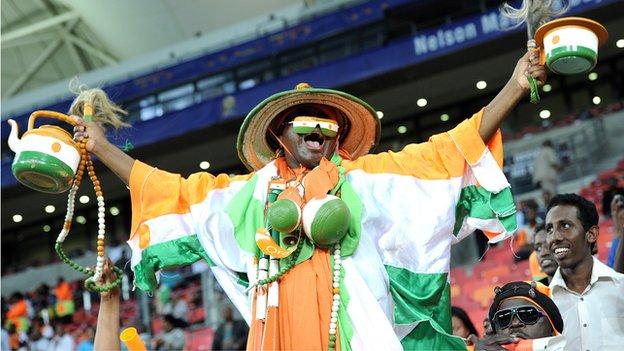 Niger coach Gernot Rohr was delighted after his side won a point at the Africa Cup of Nations for the first time by holding DR Congo on Thursday.

"Yes it's a historical point because they've never done it before and so we are a little proud," the German told BBC Sport after the 0-0 draw.

Rohr even felt his side could have even taken all three points from the match.

"We had a lot of chances to score a goal to win the game against a good DR Congo team," he added.

"Now we hope against Ghana we will play another good game."

The coach also believes his side have the backing of the neutrals in the Port Elizabeth crowd ahead of the match against the Black Stars on Monday.

"I saw the crowd was with us and it was a good atmosphere in the stadium and I hope my players can do the same against Ghana," he said.

"We know Ghana is a big team and it will be very difficult to get a good result against them.

"We don't have the chance to change much [for the Ghana game] we have a few players without clubs so it's hard to change the team."

Meanwhile, DR Congo coach Claude LeRoy felt it was a "bad" draw for his team.

"If I say [it feels like] it's a loss it means I have disrespect for Niger," he said.

"It wasn't a good game - there was some good action in the first-half and we created a lot of opportunities but we didn't score.

"Against this kind of team - they are very defensive - you have to score a goal and after they are obliged to attack a little.

"We were not surprised by Niger's tactics but we couldn't find a solution."

LeRoy added that he had not started planning for their final group game against Mali in Durban on Monday.

All four sides in Group B can still qualify for the quarter finals - Ghana top the group with four points, next are Mali on three, DR Congo have two and Niger on one.