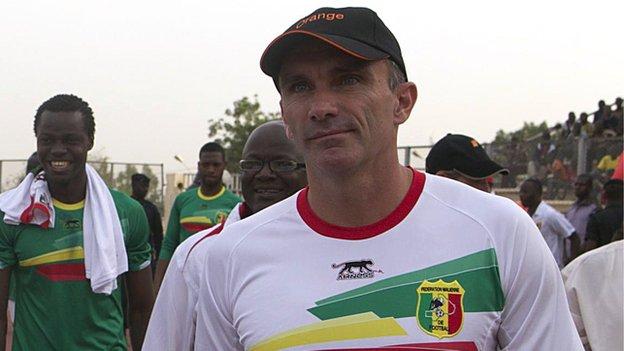 Dauda handled the ball outside the area after just only minutes of his side's 1-0 win but was only booked.

"Nobody can explain to me why the referee didn't give a red card," Carteron told BBC Sport.

"The referee can say what he likes but I know it was absolutely wrong and the rules have to be respected."

"I'm sad about the incident but it's not an excuse because we lost the game," he insisted.

"We have to be strong to prepare for the third game which is a very difficult game against DR Congo.

Ghana defender Harrison Afful, who started the game against Mali as coach Kwesi Appiah looked to bolster his defence, was already looking to their final group game against Niger.

"Now we've won we're putting it behind us and thinking about Niger now," he said.

"We are going to correct our mistakes and listen to the technical staff so we can move on."

Afful says the Black Stars will not underestimate Niger, although he admitted he knows very little about his next opponents.

"If they were weak they wouldn't be here and everyone wants to lift the trophy - that's the ultimate - but we are talking about one match at a time."

All four sides in Group B can still qualify for the quarter finals - Ghana top the group with four points, next are Mali on three, DR Congo have two and Niger one.

The final group matches are on Monday - Ghana play Niger in Port Elizabeth while DR Congo and Niger clash along the coast in Durban.