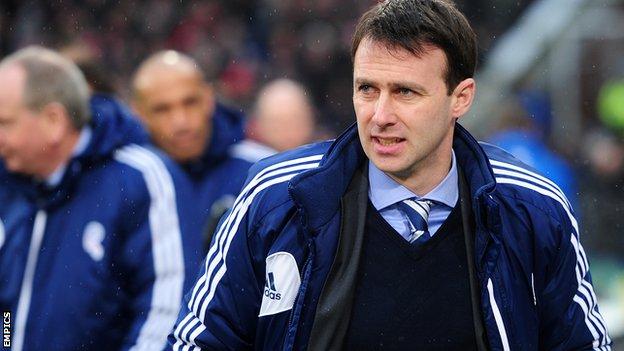 Moyes, 49, takes charge of Everton for the 500th time when the Toffees play Bolton in the FA Cup fourth round at the Reebok Stadium on Saturday.

When asked about his fellow Scot, Freedman told BBC Radio Manchester: "What David's done at Everton is huge.

"You look at what managers have done in the past and you try and do better than that, but that's not an easy job."

He continued: "David's done very well, even when he was at Preston.

As yet, Moyes has been unable to end Everton's trophy drought which stretches back to their FA Cup success in 1995, although he did take them to the final in 2009, where they were beaten 2-1 by Chelsea.

He is hoping to go one better than that this time.

"I've said to the players we want to try to win the FA Cup, but I say that every year. It's down to us to try to make that happen."

On taking charge of his 500th game, he added: "It's amazing that some people have got 1,000 games at one club, that is some achievement.

"Obviously 500 is not a bad number when you see the way people get rid of their managers so quickly nowadays.

"Hopefully the real highlights are still to come, they're the ones I'm looking forward to. But I've enjoyed a lot of good times at Everton."

Freedman, meanwhile, was within a penalty shoot-out of taking Crystal Palace to a League Cup final last season.

His Bolton team have - Sunderland - out of the competition in the third round after a replay, and the 38-year-old is looking forward to seeing Wanderers test themselves against a side currently fifth in the top flight.

Freedman added: "It's very exciting to have a team like Everton come to our place and play against. The lads fully deserve it.

"In the two games against Sunderland, I felt we were the better side and we've worked hard for this opportunity.

"Certain levels of our performances, especially at home, have been high so hopefully we can put on a good performance for our fans and that will end in a result."

will be unavailable for selection, having played for West Bromwich Albion at QPR in the third round.