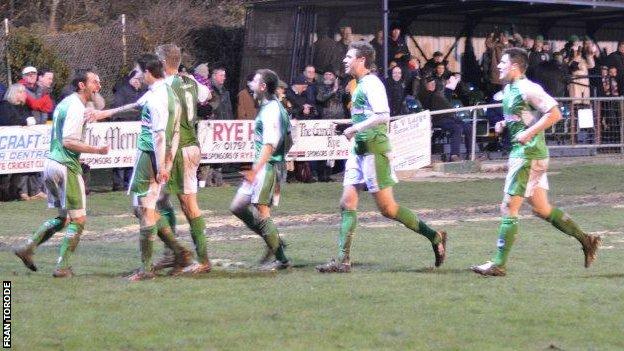 Guernsey FC boss Tony Vance has urged his side not to get carried away after their 6-5 win over Rye United in the FA Vase fourth round.

Dave Rihoy hit the winner deep into the second period of extra time to secure the island side a place in the last 16.

"At the moment we've achieved nothing other than getting into the next round," Vance told BBC Guernsey.

"But they can be very proud of their desire and heart and willingness to keep going," he added.

The Green Lions found themselves 2-0 down at The Salts after 11 minutes as Sam Crabb capitalised on some sloppy defending to score twice for the home side.

However, top-scorer Ross Allen was able to pull the visitors level by half time through a well-taken penalty and a cross-come-shot that trickled in past Josh Willis in the Rye goal to take his tally for the season to 29 goals.

Dom Heaume put Guernsey in front on 56 minutes, and the Channel Island team looked on course for a 90 minute victory before Matt MacLean hit an 81st minute late equaliser.

Sam Adams put the hosts 4-3 up eight minutes into the first period of extra time and was mobbed by his team-mates as if they were celebrating the winner.

But Heaume found the net in the 20th minute of the first period of extra time after referee Andrew Parker added on six minutes due to an injury to Matt Loaring.

Sean Kelly's strike two minutes into the second period put the hosts ahead but Tony Vance's men fought back with an 111th-minute equaliser from Nigel Hutton and Rihoy's winner.

The striker was first to a through ball onto the edge of the area, and chipped past Willis' outstretched arm for a winner which takes Guernsey through to the last 16.

Guernsey will be away to either Ely City or Spalding United in the next round and are just three rounds away from a place at Wembley.