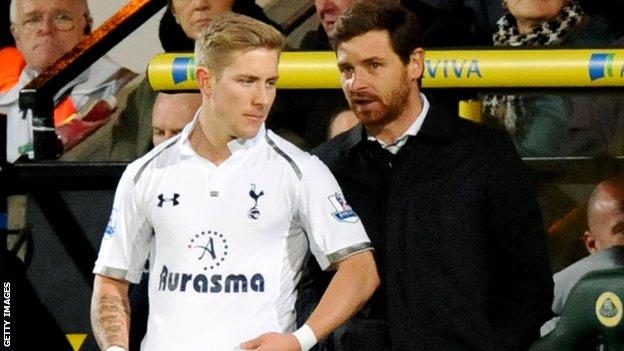 Managers may not be in favour of the January transfer window but few resisted the opportunity to bolster their squad ahead of the business end of the season.

Eighteen Premier League clubs spent a combined £120m on players during the month. But which managers appear to have taken this window of opportunity and invested wisely?

Match of the Day commentator Jonathan Pearce gives his verdict on the five new Premier League signings most likely to make an impact.

What his new manager says: "This is an unbelievable signing. Chris is just what we need. He's a monster. Great in the air, quick, a leader, strong, fantastic in both boxes, hard as nails." Harry Redknapp

QPR spent a club record fee on the muscular central defender, who signed a four-and-a-half year deal. He previously made 161 Premier League appearances with Blackburn before joining Anzhi Makhachkala last February. His spell in Russia was marred by a racist incident when a fan threw a banana at him.

Samba was born to Congolese parents in a suburb of Paris and he credits the African nation's football federation with reviving his career. Samba had been released by Sedan aged 19 after breaking his leg but he went to a local training camp for players who were eligible to represent Congo-Brazzaville.

He was spotted by Hertha Berlin and spent three years at the club before making a £400,000 switch to Blackburn in January 2007.

Jonathan Pearce's verdict: "No football fan or opposition player could fail to notice the eye-catching Samba. At 6ft 4in and 13 stone there's a lot of him! What makes this such a staggering deal is the £12.5m fee and reported £100,000 weekly wages for a 28-year-old with diminishing resale value.

"Redknapp needs strong leaders on the pitch; Samba is powerful in both penalty boxes and was a big influence on the Blackburn dressing room."

Signed from: Crystal Palace, £10m rising to a potential £15m (he will spend the rest of the season back at Palace on loan)

What his new manager says: "We are signing a player of potential. We always feel we develop players well. We have proved that many times." Sir Alex Ferguson

Fleet-footed Zaha has dazzled this season and much of last, earning a senior England debut in November's friendly defeat by Sweden. A quiet character, he does not lack self-belief, saying recently that he cannot think of anyone being better than him "unless it's Cristiano Ronaldo or Lionel Messi".

Dazet Wilfried Armel Zaha was born in the Ivory Coast and came to south London aged four. The eighth of nine children, he learned his football on the streets of Croydon and meticulously practised his skills and tricks with a tennis ball around the house. He was spotted by Crystal Palace while playing park football and put straight into the club's under-10 side.

Zaha said shortly before his senior international debut that he was "50-50" as to whether to represent England or Ivory Coast. He will remain eligible to play for either country until he plays in a competitive international.

Jonathan Pearce's verdict: "Former Palace boss Dougie Freedman once told me that Zaha is destined for the very top. Of all the January signings he could have the most lasting impact.

"Many young players have buckled under the pressure of being a United starlet. Zaha can handle it. He has pace to burn, sumptuous skills and a willingness to listen and learn."

What his new manager says: "He will bring drive and energy to the squad, he is a winner and that's why I'm especially pleased to have him with us." Alan Pardew

If Sissoko can maintain the form he displayed on debut at Aston Villa, Newcastle will have landed a real bargain. Only three years ago the midfielder was rated at £18m, yet the Magpies are believed to have landed the 23-year-old for a tenth of that figure.

Toulouse decided to cash in on the France international rather than lose him for nothing when his contract expired in the summer.

Regular observers of French football believe Sissoko was stagnating with the Ligue One club, and the player admits he was in his "comfort zone". Born and raised in the suburbs of Paris, he moved to Toulouse as a 13-year-old, breaking into the first team in 2007 shortly after his 18th birthday.

Jonathan Pearce's verdict: "Alan Pardew unearthed a French gem in Yohan Cabaye and could well have found another in Sissoko. He'll no doubt be tagged as the new Patrick Vieira and there are similarities.

"He is a commanding, tall, box-to-box midfielder with a strong tackle, decent distribution and an eye for a goal. Newcastle won't be bullied by anyone while he's around and he can dictate the play authoritatively."

What his new manager says: "He is an extremely talented attacking midfielder who can play in a variety of roles. I think he is an excellent addition for us." Andre Villas-Boas

The Germany international was born near Moenchengladbach, where his English father was stationed in the British Army.

Released by his hometown club for being too small and slow, Holtby joined second division Alemannia Aachen before progressing to the top flight with Schalke in 2009. He scored 12 goals in 77 league and cup appearances for the club.

Holtby has a quote tattooed on his right forearm in memory of a close friend who died in the Swiss mountains last year. The quote, by Brazilian lyricist Paulo Coelho, was a favourite of Holtby's friend and reads, in German: 'A warrior of light knows that in the silence of his heart he will hear an order that will show him the way.'

Jonathan Pearce's verdict: "Since the departures of Rafael van der Vaart and Luka Modric, Spurs have often lacked sparkle and variety in the hole behind the striker. Holtby has the creativity, technique, drive and versatility to fill that gap.

"At £1.5m he could become one of the best bargains at the January sales. He looked classy for Schalke against Arsenal in the Champions League this season."

The Argentine striker finally gets a chance to play in the Premier League after four and a half years at Leeds United.

The striker arrived at Elland Road after a somewhat nomadic existence in the Spanish leagues. A return of 21 league goals for Third Division Merida in the 2007-08 season prompted Leeds to take a chance on him, and he has left Elland Road as one of the club's top 10 leading league goalscorers of all time.

Becchio has already made headlines at Carrow Road, albeit for reasons he would rather forget - he was knocked unconscious and swallowed his tongue after a kick in the face by then-Norwich defender Michael Nelson in March 2010.

Jonathan Pearce's verdict: "At last the mercurial Argentine reaches the Premier League and just in time for Norwich, who are in relegation form. Becchio could well be the man to turn Norwich around and ease them to safety; 19 goals this season have taken him to 86 in 221 games for Leeds.

"He also has the scoring knack in big games, netting against Premier League Chelsea, Southampton and Tottenham in cup ties as well as in fierce derby matches and play-off games."