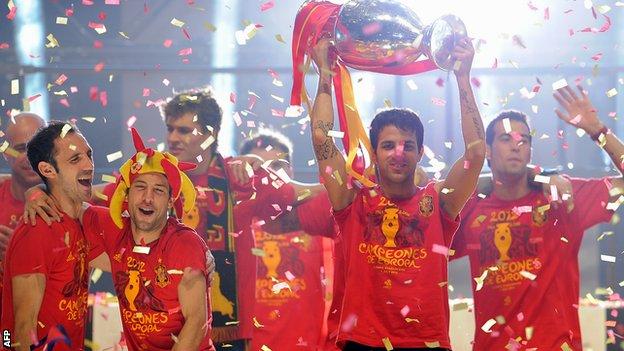 Euro 2020 will be held in 13 cities, with the semi-finals and final played at the same stadium, Uefa has announced.

European football's governing body has confirmed earlier plans to hold the tournament across the continent.

There will be no more than one venue per country and host countries will not qualify automatically.

However host nations who do qualify for the tournament will play at least two of their three group matches at home.

Gianni Infantino, Uefa Secretary General, told a news conference in Nyon, Switzerland, on Friday: "The matches will be split into 13 packages - 12 cities who will have three group stage matches and one knock-out round match, and one city will host the two semi-finals and final.

"There will be only one venue per country and it means the semi-finals and the final will be played in the same venue."

The Football Association has already put forward Wembley as a possible venue for the final. It expects to face rival bids from Berlin, Istanbul, Madrid and Rome.

Istanbul is the favourite for the final - but only if it loses its bid for the 2020 Olympics. Uefa president Michel Platini has already said he would back the Turkish city and he confirmed his position again on Friday.

"[Istanbul] would be my vote, but if they get the Olympic Games it's out of the question that they could stage the Euros [final] or a match."

Cardiff, Dublin and Glasgow are all expected to bid to host group matches. The FA will also bid for group matches and quarter-finals if its bid to host the final stages at Wembley is unsuccessful.

Uefa's executive committee will meet on 28 March to decide the bidding requirements. It is expected that bidding cities will have to provide an airport with two terminals or two different airports in order to keep rival fans apart - something that could pose a problem for Cardiff.

Infantino also confirmed that Uefa will take travel distances into account when allocating venues, with a maximum flight time of two hours between host cities, where possible.

A final decision on venues for Euro 2020, the tournament's 60th anniversary, will be made in September next year.