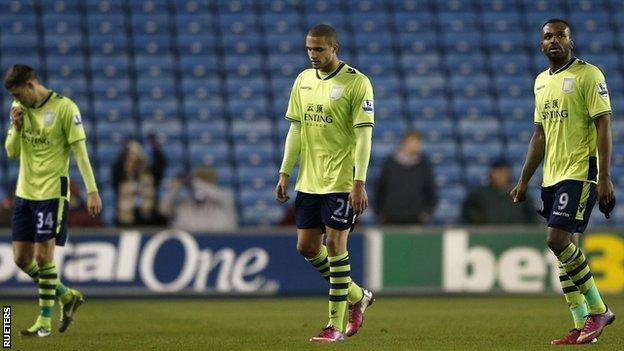 Villa, 17th in the Premier League, lost 2-1 at the Den three days after being knocked out of the Capital One Cup by League Two side Bradford City.

"It's not great, but you have to keep going," Lambert told BBC Sport.

Doomed at The Den

"You take your medicine, pick yourself up and go again. There's no way you can lie down."

Darren Bent had given Villa the lead against the Championship side, only for Danny Shittu to level.

Then, with the tie heading for a replay, John Marquis's 89th-minute header put 2004 finalists Millwall into the fifth round.

"We conceded from a set-piece when we were up a goal and their second goal was just a crossed ball," added Lambert.

"I wouldn't mind if we were being cut open with brilliant play but we're losing goals to bog-standard stuff at the minute. Individual errors are costing us.

"It's easy for me to say we practise in training, but we do. However, that's when your mate doesn't want to cut your eye in. In matches, you can't be afraid to get cut and get hurt."

Despite Villa's poor run, Lambert is still believed to have the support of Randy Lerner, with the Scot praising the club's American owner.

There could be some good news for Villa fans with striker Andreas Weimann in talks with the club over a new contract.

Weimann, who joined Villa as a 16-year-old from Rapid Vienna, has 18 months left on his current contract but the club are hoping to tie him down to a new long-term contract.

His form this season has been one of the factors in Darren Bent struggling to get a starting place. He has scored nine goals in all competitions and won his first senior cap for Austria in October.

Millwall boss Kenny Jackett praised his side as they reached the last 16 of the FA Cup for the second season running.

"I thought it was a terrific performance from the whole team," he said.

"We deserved to win and I was so pleased for John Marquis that he got the winning goal. He has been out for a long time and has worked so hard to get back to fitness."

Jackett did, however, criticise Millwall fans that caused play to be delayed during the second half when bottles were thrown at assistant referee Mark Scholes.

"We can't condone people throwing bottles on to the pitch. That doesn't help us," he said

"There's a line between supporting your club and creating a passionate atmosphere but we don't want to step over that line."