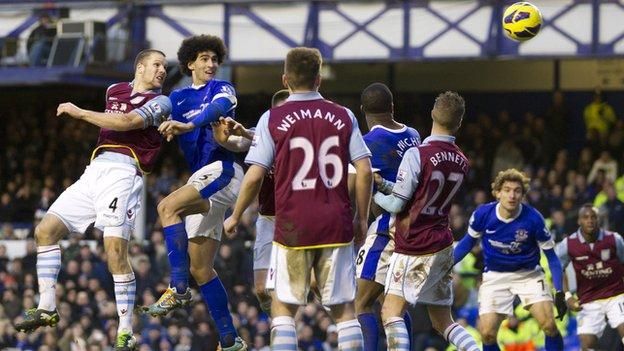 Marouane Fellaini produced a towering second-half display, scoring twice as Everton came from 3-1 down to deny Aston Villa their first league win of 2013 in a breathless encounter at Goodison Park.

The Belgian headed in an injury-time equaliser to leave Paul Lambert's young side staring at each other in disbelief, having come within minutes of inflicting what would have been only Everton's second home defeat of the season. The result leaves Villa in the bottom three.

For 93 minutes it had looked as if this would be Villa's day. Christian Benteke fired them in front early on, only for Victor Anichebe to bring Everton level.

But two headers, the first from Gabriel Agbonlahor, and a brave second from Benteke, set Villa on course for victory.

"The pressure was relentless from Everton and eventually paid off with Marouane Fellaini's late goals. A dramatic afternoon at Goodison Park ends all level when it seemed Aston Villa were heading for a much-needed win."

But with 20 minutes remaining Fellaini fired a low shot beyond goalkeeper Brad Guzan.

With the final whistle near, the Belgian leapt to head in Leighton Baines' corner and deny Villa three vital points

January had been a chastening month for Lambert's side. Elimination from the Capital One Cup and FA Cup by Bradford City and Millwall respectively, plus defeats by fellow strugglers Newcastle and Southampton left them in the bottom three.

Their last league victory came in their most-recent visit to Merseyside - against Liverpool on 15 December. For 90-plus minutes it had looked as if lightning would strike twice.

On both sides, the football was muscular and committed but devoid of finesse. The challenges were fierce, with neither side able to string more than a handful of passes together on a dry and bobbly pitch.

Played worst game ever in the shirt of Everton. Let teammates and fans down but they never let me down. Will work hard to come back strong.

Villa snapped into the challenges from the off and landed the first blow in the second minute.

Charles N'Zogbia drifted in from the right, with Benteke gathering his neat pass and surging beyond a static John Heitinga before drilling a low shot across Everton goalkeeper Tim Howard into the far corner of the goal.

It woke Everton from their slumber and Fellaini came within a whisker a minute later. But Everton had to wait another 15 minutes to get back on terms, Anichebe holding off Ciaran Clark and steering the ball beyond Guzan.

Within two minutes, Everton were behind again, their defence switching off and allowing Agbonlahor to rise unchallenged and head in Ashley Westwood's right-wing cross.

Agbonlahor's pace meant the visitors were a constant threat and the England international created another wonderful chance. His through-ball set Andreas Weimann racing towards goal but, with just Howard to beat, the Austrian forward blazed over.

It was to prove a warning shot, as Villa struck again to go 3-1 ahead. Matthew Lowton found space on the right and his pin-point cross was met by Benteke's brave diving header that steered the ball beyond Howard.

But Everton were in no mood to roll over as Fellaini's low strike flashed beyond Guzan after a neat exchange of passes with Anichebe.

Villa must have thought they had won until Everton were given a 93rd-minute corner, from which Baines picked out Fellaini who rose majestically to have the final word.