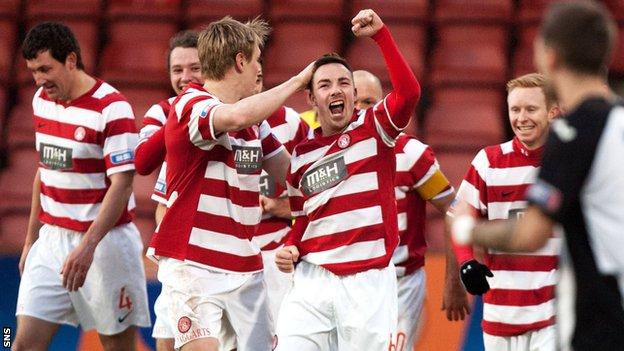 Hamilton Accies knocked Dunfermline out of the Scottish Cup with a fifth-round win at East End Park.

After a scoreless first half, Steven May fired the visitors into a 51st-minute lead.

And Jonathon Routledge doubled Accies' lead 10 minutes later, netting from the edge of the penalty area.

Dunfermline's Andy Kirk was denied by the post and the Pars were unable to mount a comeback.

The visitors, 13 points behind their hosts in the Division One standings, had the better chances throughout and were unlucky not to be ahead in the first half after Routledge and May each missed glorious close-range chances.

However, the duo were on hand to put Hamilton on course for the win in the second half.

May opened the scoring when he fired a wonderful strike into the net from just outside the box five minutes after the restart, before Routledge's composed shot from inside the box found the top corner on the hour mark.

Darian Mackinnon had two attempts at the Dunfermline goal blocked, while the hosts had a Stephen Husband shot as their only real effort.

Dunfermline manager Jim Jefferies: "It was a very tight match. I thought the first goal was always going to be crucial. He [goalscorer May] is one we picked out in the team talk. You can't stand off him. We are to blame for backing off and allowing him to strike.

"There was plenty of effort but it's just the quality, our play around the last third [of the pitch].

"How many chances did we have today to put the ball in but we wanted to beat him again and then we end up with nothing?

"There weren't enough challenges, not enough type of balls to go and attack.

"They were a bit hungrier than us to win and that was the disappointing thing."

Hamilton Accies manager Billy Reid: "First-half, it was fairly even but we had an outstanding chance with Jon Routledge - he's missed an open goal from three yards!

"I thought we started the second half really well and the goals were scored were terrific.

"Over 90 minutes we were solid as a unit and deserved the win.

"We limited chances for them and we were smashing on the break. We pretty much controlled the game."