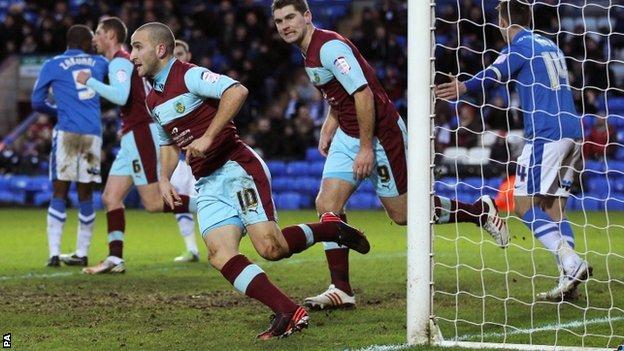 Peterborough remain rooted to the bottom of the Championship after Burnley's Martin Paterson grabbed a late goal to deny them a home win.

But two goals from Tommy Rowe - the second a product of his own mazy 60-yard run - put Peterborough in command.

Paterson very nearly added a dramatic winner in the dying stages, but Robert Olejnik saved brilliantly from his close-range header.

Peterborough had recovered well from Austin's early strike and Michael Bostwick came close to an equaliser when he headed over Grant McCann's free-kick.

At the other end, a second strike looked on for Austin but his snapshot was well saved by Olejnik.

Posh finally equalised with 25 minutes left on the clock when Burnley failed to clear a corner and skipper Rowe fired in from six yards.

His second soon followed as he threaded the ball through to Dwight Gayle after a superb 60-yard run. Gayle's shot was diverted back into Rowe's path and he drilled the ball home.

Burnley pressed on and a persistent Paterson ensured they took home a share of the points.

"It's a pleasing point in one respect as it takes us closer to the play-off places, but it's also a frustrating result as we felt this was a game we could have won.

"We conceded a poor goal to be pegged back and then found ourselves behind, but our boys always keep going right to the bitter end.

"We're four points off the top six and in good shape but we're hungry for more than that."

"We've put ourselves in a position where we have to win games so we can't be happy with a point.

"We certainly won't lack for commitment or character, but we do have to cut out the basic errors which have been costing us points all season. We cannot keep going home on a Saturday night saying 'we should have won'.

"We have been guilty of far too many lapses of concentration this season and that is the reason why we are bottom of the table."