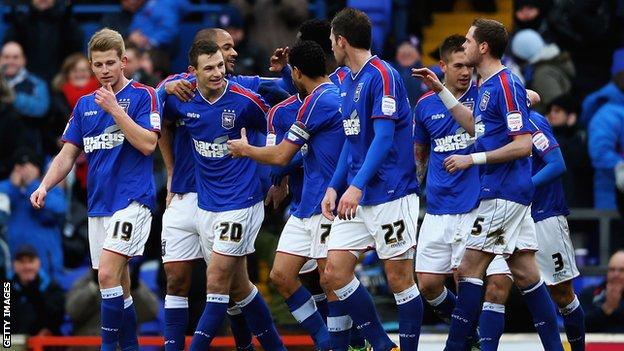 Tommy Smith scored twice as Ipswich Town boosted their chances of avoiding relegation with a fine victory over promotion-chasing Middlesbrough.

Smith opened the scoring with a powerful header from Aaron Cresswell's corner before David McGoldrick doubled the lead with a long-range drive.

Aaron McLean made it 3-0 with an impressive finish before another Smith header completed the scoring.

It was a bad day for Tony Mowbray's team, who are six points from an automatic promotion spot after a fourth straight league defeat.

Ipswich have had little to smile about this season but their biggest win of the campaign will give Mick McCarthy's hope of avoiding relegation.

There was little evidence of what was to come when Smith broke the deadlock seven minutes from half-time with a fine header.

Boro found themselves 2-0 behind after McGoldrick won the ball in midfield before shooting from outside the box in the 47th minute.

McLean shook off his man before curling home expertly from outside the box for the third.

Middlesbrough's day to forget ended when Smith found the target with another header 12 minutes from time.

"After our second goal we blossomed and grew in confidence and belief.

"The two goals were a bit of payback for Tommy [Smith], for all the times he's been in there and nearly scored, when the flight of the ball has just beaten him.

"You have to keep persevering and this week he managed to score two superb headed goals."

"It was a poor performance from us and there are no excuses.

"We came here in a positive mood thinking we could get three points, hoping to push on and put pressure on the top two again.