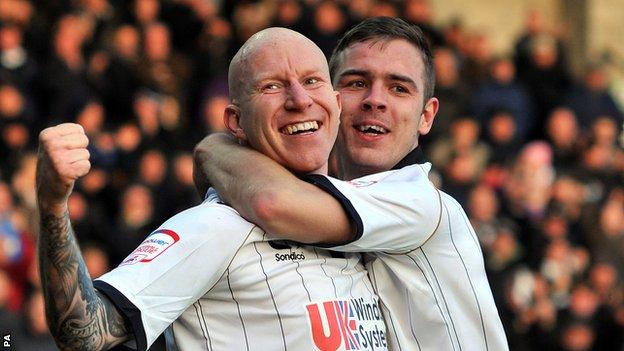 Lee Hughes's brace on his home debut helped Port Vale ease past 10-man Accrington Stanley at Vale Park and return to the top of League Two.

The visitors were a man down after just four minutes when Charlie Barnett saw red for a tackle on Daniel Jones.

Hughes then wrapped up the three points by coolly finishing when put through.

Stanley came within inches of scoring with the scores level at 0-0, but Peter Murphy's shot was cleared off the line by Vale skipper Doug Loft.

The win means Vale leapfrog Gillingham, who play on Monday, at the top of the table, while Accrington remain in 20th, two points above the relegation zone.

"To go down to 10 men after three or four minutes at a place like this is always going to be tough.

"In the first half, we coped with it quite well and looked quite comfortable.

"If people put that much effort in, as individuals and as a unit, you haven't got a problem. The red card has affected everything we've done through the week.

"With 11 men on the pitch, I really fancied us to come here and get something."