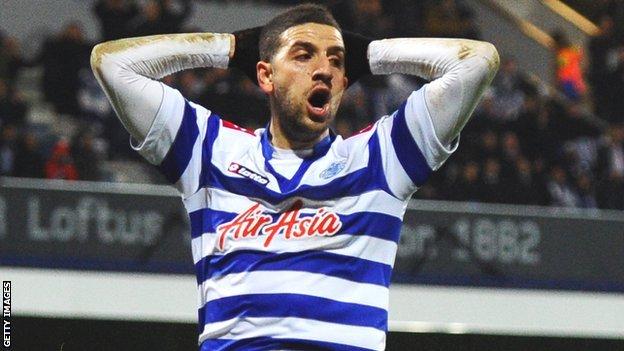 The Canaries were furious about the award after Bunn felled Jamie Mackie, but the keeper made a fine diving save from the otherwise impressive Taarabt.

But home keeper Julio Cesar was forced to make several decent saves in a thrilling second half to earn the draw.

"QPR were forced to settle for a point and that will suit Norwich far more than QPR. A poor and fragmented first half was much improved in the second half.

"Mark Bunn made a number of fine saves, including from Taarabt's penalty, and Julio Cesar also made three terrific stops."

Despite stretching the improving QPR's unbeaten league run to five games, the visitors will be happier with a result that lifts them seven points away from the relegation zone.

Ultimately both sides were punished for their lack of quality in front of goal - something both managers had sought to address in the transfer window.

Redknapp and Norwich counterpart Chris Hughton had clearly been set on bolstering their respective attacks.

And how both sides could have done with a cutting edge during a dismal and disjointed first half littered with errors.

A promising enough start soon petered out with the only serious first-half entertainment provided by the supremely-talented Taarabt.

Redknapp, deprived of the services of injured striker Loic Remy, has given playmaker Taarabt the freedom his ability demands and he showed flashes of his class in the opening 45 minutes.

The Moroccan's best effort saw him use his strength and quick feet to beat three men before firing a low shot narrowly wide.

Norwich should have scored in the first few minutes when Wes Hoolahan could only divert a teasing Robert Snodgrass cross over the bar from close range.

But apart from that and a tame Snodgrass header they barely threatened.

Thankfully a much improved second half followed.

A delicious Taarabt free-kick, played across the face of the six-yard box, eluded everyone within seconds of the restart and the chances continued throughout.

Cesar made a fabulous one-handed reaction save to keep out Hoolahan's close-range flicked effort after a fine cross from Snodgrass, and also made a decent stop from Bradley Johnson.

Taarabt still seemed the most likely scorer but was guilty of wasting the hosts' best chance from the spot. His penalty, awarded as Mackie tumbled when caught by Bunn after a poor Javier Garrido backpass, was well struck but the keeper dived low to his left to turn the ball away.

Taarabt tried to make amends but was off target with a 20-yard free-kick and then forced a messy save from Bunn, who just about kept out a swerving strike.

Record-signing Christopher Samba, who was steady and assured at the back, also had a header cleared by Grant Holt on the goalline and Clint Hill and Bobby Zamora both had headed opportunities.

As the game reached its closing stages a decent long-range Snodgrass strike forced one final save from Cesar while Samba's fellow debutant Andros Townsend also tested the excellent Bunn from distance.

But Norwich, who gave a debut to new signing Luciano Becchio as a late substitute, were able to hold on for just their third point in the last eight games.

"I felt if we had scored the penalty, we would have gone on and won the game.

"Of course we need wins, but we could not have tried any harder - we gave everything.

"I couldn't have asked for more. We just needed a break. We just need to turn draws into wins. We're unbeaten since the turn of the year so we've just got to keep going."

"Every point away from home in this division is a good point, especially against a team in form.

"We knew it was going to be a tough game, but I thought a draw was a fair result.

"We are a hard-working team who were always going to have a tough season, so it is all about assessing the games and coming good again.

"At the moment, although we are not picking up three points, we have played out two good draws and the gap between us and the bottom three is very important."