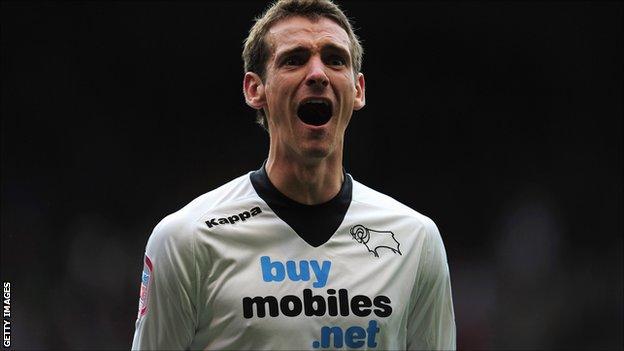 Derby earned their first victory since New Year's Day to move to within six points of the play-off zone after a comprehensive win over Huddersfield.

The Rams took the lead midway through the first half after Craig Bryson found the net from close range.

Derby extended their lead when Gareth Roberts's cross was volleyed into the top corner of the net by Jamie Ward.

And just before the hour Derby got their third after Richard Keogh headed home Ward's free kick.

The result means Huddersfield are five points above the drop zone, while Derby closed the gap on sixth-placed Middlesbrough, who were beaten at Ipswich.

Derby dominated the first half, creating a handful of chances and thoroughly deserved their 2-0 lead at the interval.

Huddersfield goalkeeper Alex Smithies pushed Ward's 25-yard free-kick over the crossbar early on, before James Vaughan burst into the box and curled a shot narrowly wide for the visitors.

But the Rams soon made the breakthrough and following a driving run down the right, Paul Coutts crossed the ball into the six-yard box where Bryson was on hand to tap in.

Soon after Derby extended their lead when Roberts's cross was hit home by Ward.

The second half was relatively quiet, especially after the Rams scored their third goal and embarked upon long periods of keep-ball.

But Derby were still creating chances and Ward saw a goal-bound effort blocked before Smithies denied Sammon with 15 minutes remaining.

Roberts worried the Town keeper late on with another long-range effort but the left-back's shot whistled over the bar.

"We were outstanding from the first minute to the last and everybody was on top of their game out there. There's no reason why we can't make the top six.

"It's a very good squad in terms of effort and honesty and when we are on it, we are as good as anything in this division.

"We scored three excellent goals and it was a magnificent finish from Jamie Ward. He's getting back to full fitness, three weeks ago he couldn't even lift his leg that high.

"It was a very good all-round performance from him because he also brought other players into the game."

"Derby played very well and all credit to Nigel (Clough), he's doing well and they looked like a top six team.

"It's been a tough week for us and we caught them on a good day and they deserved the win.

"But there's no lack of application or commitment on the pitch and I am proud of the players."