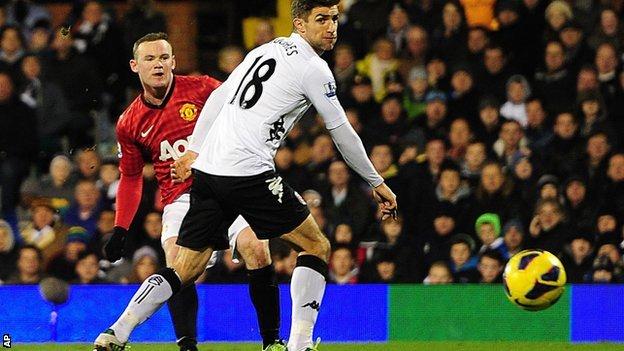 Rooney surged forward after 78 minutes to meet a Jonny Evans long ball and send a cool finish into the far corner for his 10th goal in as many games.

The striker had earlier hit the post in an open match in which both teams threatened, with Fulham's Bryan Ruiz also denied by the woodwork.

Ruiz also had a header cleared off the line before Rooney's goal.

In a frantic finale, Fulham were denied an equaliser when United striker Robin van Persie cleared a Philippe Senderos header off the line.

And with the home side exposed as they pushed for a leveller, Javier Hernandez then broke clear and only some smart goalkeeping from Mark Schwarzer denied the United forward.

The visitors survived the remainder of stoppage time to secure a victory that puts extra pressure on second-placed Manchester City, who play Liverpool on Sunday.

A match interrupted by a floodlight failure just before half-time looked like being a frustrating one for United but, as so often this season, the quality of their forward line came to their rescue.

Fulham were beaten 5-0 in the corresponding fixture last season and 4-1 in the FA Cup by the Red Devils last week but they were a different proposition this time around.

The Cottagers created the first opening when Hugo Rodallega broke clear and pulled the ball back for Ashkan Dejagah, who mistimed his shot.

The chance sparked an open spell as both teams adopted the approach that attack was the best form of defence, the woodwork intervening on four occasions in the first half.

Fulham somehow survived a goalmouth scramble that began when Schwarzer pulled off a reaction save after Van Persie's corner came off defender Brede Hangeland. Patrice Evra latched on to the loose ball, only for his shot to hit the bar before Rooney's follow-up was cleared off the line by Sascha Riether.

If the visitors could not believe they were not in front, they were soon relieved not to be behind as Fulham twice went close in quick succession.

First, a long-range John Arne Riise strike was tipped over by United keeper David de Gea before a counter-attack from the home side culminated in a Ruiz shot from the edge of the area that came back off the post.

Hangeland, proving more of a hindrance than a help to the home side, then again went close to scoring an own goal when he inadvertently headed a corner against his own bar.

Just when it seemed the game might calm down, United midfielder Tom Cleverley laid the ball off for Rooney, whose shot came back off the post.

The players were forced off the field briefly when the floodlights failed before returning to play out the remainder of the first half in less frantic fashion than hitherto.

Hangeland, who had picked up a knock, was replaced by Aaron Hughes at the start of a second half that saw Van Persie tamely head into the arms of Schwarzer when well-placed.

As Fulham stood firm, United's frustration was reflected in the gestures from manager Sir Alex Ferguson in the visitors' dug-out. And the Scot's mood was not helped when centre-back Rio Ferdinand was caught in possession and Giorgos Karagounis dragged a 20-yard shot wide.

The sides traded chances as they chased a win. Nani had a shot deflected high for the visitors, while Ruiz failed to get enough power on an effort for the hosts after Riether's effort had been parried by De Gea.

With time running out, Rafael Da Silva cleared a Ruiz header off the United goal-line and it proved crucial as a clearance over the top from Evans released Rooney, who guided an expert strike around Hughes and past Schwarzer for the winner.

"We did well in midfield and at the back. It was one of our better performances this season.

"But they are capable of creating something out of nothing, as Rooney did. Now, I think they will win it [the Premier League title]."

He added: "We did well to get the lights on again. Normally it takes a long time. I feared when we came back our concentration was down and we would end up conceding a goal but it wasn't a problem."