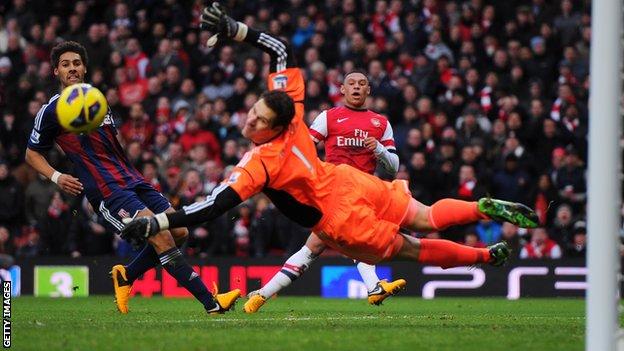 But Podolski's set-piece went in off Geoff Cameron to take the points.

It was tough on Stoke, who looked set to end a run of seven straight league defeats away to the Gunners before Podolski pounced 12 minutes from time.

The visitors claimed Olivier Giroud was in an offside position when the German's free-kick deceived Begovic after cannoning off Cameron. Referee Chris Foy consulted with his assistant before allowing the goal.

Stoke were clearly agitated by the decision, with the game threatening to boil over in the closing stages. Potters substitute Michael Owen appeared to thump Mikel Arteta on his back after the Spaniard had challenged the former England striker.

Arsenal, who included had scored 22 goals in the previous eight league games.

Smiles in the end for Arsene Wenger but it required a huge slice of luck for Arsenal to finally find the net after a battling Stoke performance. The visitors will complain about the goal while there were a couple of meaty challenges towards the end. But this was far from a comfortable win for the Gunners."

But their form has been erratic of late, with three wins, three draws and two defeats since the turn of the year.

And for long spells Gunners boss Arsene Wenger seemed frustrated as he prowled the touchline.

His side carved out a string of chances but found Begovic, 25, in inspirational form.

Stoke's earlier in the week produced an impressive response from the first-choice Bosnian.

Having denied Oxlade-Chamberlain from inside the six-yard area after Stoke had failed to deal with a corner, the former Portsmouth goalkeeper kept out Koscielny's powerful header.

Yet his best save came four minutes before the interval. A delightful pass from Jack Wilshere presented Oxlade-Chamberlain with another opportunity but the Gunners were left frustrated.

That was until Andy Wilkinson's lunge on Theo Walcott, which earned the Stoke player a booking, and allowed Podolski to score from the free-kick.

"I said already before the West Ham and Liverpool games, that we are in a position where we cannot drop points.

"We dropped two points against Liverpool but we couldn't do it again. What is more important is the quality of performances is there. The spirit is there.

"The target is to be in the top four and to focus on the two cups we are still in."

"We've leaked a lot of goals in the last couple of games and although we've played Manchester City twice, Chelsea and now Arsenal, it has been a difficult run.

"But that was the same at the beginning of the season and we only have Manchester United and Tottenham at our place now.

"We've got most of the big ones out of the way."