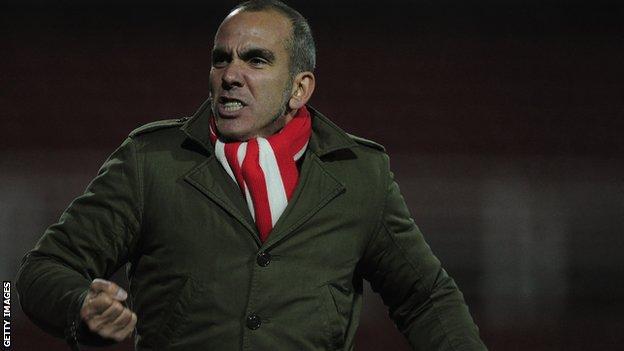 Paolo Di Canio's Swindon rescued a point against Crawley in a game where both goals came from the penalty spot.

The contest came after Di Canio had said his future with the club was in doubt because of off-field issues.

And his side had to come from behind after captain Alan McCormack felled Nicky Adams in the box, and Billy Clarke scored from the spot.

Joe Walsh conceded the second-half penalty when he pushed over Adam Rooney, and the striker duly converted.

Substitute Rooney, on loan from Birmingham, had not played since November but he was lively in front of goal, and would have slid home a second had goalkeeper Paul Jones not executed a brilliant one-handed save.

In a game lacking spark, Crawley's best chance in open play came in the first half from Jamie Proctor, who went one-on-one with Wes Foderingham but the keeper pushed his effort wide.

The result means Swindon drop to fourth in the League One table - five points from the automatic promotion places - while Crawley slip to 14th.

In a week at Swindon dominated by drama off the pitch - with the club being sold to avoid administration and the shock departure of Matt Ritchie to Bournemouth - an emotional Di Canio came on the field at the final whistle to give his thanks to the travelling fans, and appeared to exit in tears.

"I won't speak about my future. It is match day and I want to talk about the team performance.

"There are times where you have to make a decision on something and I did that yesterday [with the statement].

"It took me 10-15 minutes to make that statement and then I was fully focused on my team.

"If I'm not wrong, today proved I was totally focused. My change was the game changer."

"I thought the players stuck at their tasks well on what now looks like a ploughed field and it was really difficult to play the way we want but I thought they were fantastic.

"I thought both penalties were a bit soft and on this pitch it's difficult to stay on your feet.

"A young squad, seven players 21 and under in the squad today and the two centre-halves threw themselves at everything and they're making better decisions on a weekly basis. The back four were fantastic."