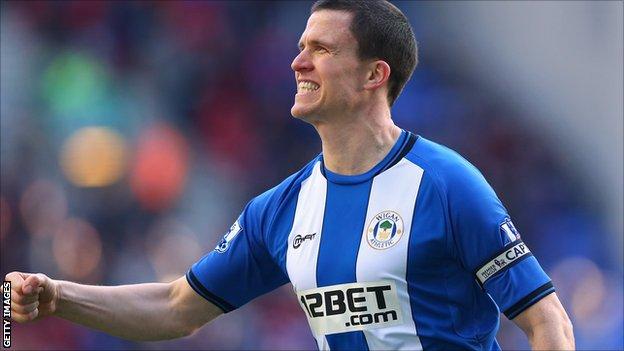 The Latics led at the break courtesy of Gary Caldwell's header from 12 yards but Rickie Lambert nodded home from close range to level.

Adam Lallana crashed a half-volley off the post for Saints before Morgan Schneiderlin's side-foot made it 2-1.

The result keeps Wigan in the bottom three and two points from safety after Reading's victory against Sunderland.

"The expression on the Southampton players' faces tells its own story. They will feel they have tossed away two very vital points."

Saints are three points better off and, while new manager Mauricio Pochettino is still searching for his first win, he would have been hugely encouraged by another dominant performance from his side, who came agonisingly close to victory.

At the other end Gaston Ramirez should have put Saints ahead but after timing his run to perfection he volleyed Lambert's cross over from 10 yards out.

But Caldwell soon gave Wigan the lead, burying a header from Beausejour's corner into the bottom of the net from 12 yards.

Schneiderlin almost pulled Saints level in bizarre fashion with his block from James McCarthy's clearance on the edge of the Wigan box rebounding towards goal before being superbly tipped over the bar by Ali Al Habsi.

Jos Hooiveld went close with a header as Saints pressed hard for an equaliser but they found Caldwell and Paul Scharner in imperious form at the back, the Wigan defensive duo blocking and clearing everything thrown at them.

But their resistance was eventually broken and Saints levelled through their talisman Lambert who bravely beat Al Habsi to the ball to head home from close range after fine work from Jack Cork on the right wing.

Saints then came close to going ahead but Lallana's half-volley on the swivel crashed back off the post. Lambert volleyed wide from a Luke Shaw cross as the visitors continued to press for the winner.

And it looked to have come through midfielder Schneiderlin, who side-footed home from close range after a rapid Saints break culminating in a fine run and cross from Rodriguez.

But Wigan refused to give up and when Scharner got his head to a late corner, Maloney was there to scuff the ball over the line.

"It's another point gained. It was vital.

"We've played Southampton twice and got four points and that is a very good return.

"Paul Scharner was very impressive and he brought real intensity to our defending. He will be important to us between now and the end of the season.

"We still have got many points to achieve and we have to use our experience of previous seasons."

"I'm happy with the performance but disappointed with the result but you always have to wait until the end of the match.

"The players have accepted my style very much. I'm sad for the players and thank the supporters.

"Little by little I'm learning (the language) but it will be a slow process. Body language is as important as actual language."