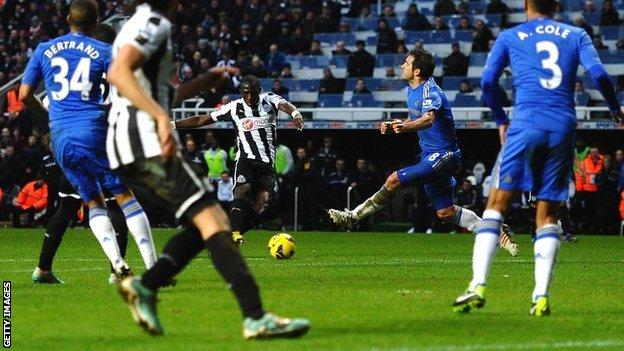 Moussa Sissoko scored twice on his home debut as Newcastle came from behind to beat Chelsea in a rousing game.

Former Magpies striker Demba Ba had the first decent chance, but headed wide and then went off as he was caught in the face by Fabricio Coloccini's boot.

Sissoko equalised on 68 minutes and struck the winner in stoppage time.

It was a thrilling introduction to the home supporters for the French midfielder, who signed for Newcastle on 25 January and was a constant threat.

Newcastle boss Alan Pardew described his new capture as the difference in their crucial win over Aston Villa in midweek, and here the 23-year-old proved indefatigable by teaming up superbly with fellow home debutant Yoan Gouffran and the scheming Yohan Cabaye to eventually eclipse their visitors.

Consecutive victories for the first time since April moved Newcastle eight points clear of the relegation zone and suggested that, despite losing Ba to the European champions earlier in January, they have realistic hopes of climbing the table again.

Chelsea, for all their second-half revival, fell to their first away defeat since 1 December.

Indeed, Rafael Benitez's side are now winless in four games in all competitions, and although there were some enterprising moments, not least Lampard's and Mata's superb goals, this result will hardly win Benitez any new fans at Stamford Bridge.

Lampard goes from strength to strength

Chelsea's afternoon was summed up by Ba, who had a game to forget on his return to St James' Park.

The Senegalese was booed from the start and ended up leaving the field before half-time with what was later confirmed to be a broken nose after taking a kick in the face from Coloccini.

The injury occurred as Ba almost gave Chelsea the lead. He collected Lampard's throughball and, when his first effort was saved by Tim Krul, the ball bounced back to him and he headed inches wide, taking a whack in the process.

Ba received lengthy treatment on the sidelines as blood streamed from his nose, although referee Howard Webb did not penalise the home defender.

And no sooner had Ba returned to the field than Newcastle were ahead.

The hosts had already tested Petr Cech on several occasions, with Papiss Cisse coming closest, but they made the breakthrough when Cabaye swept the ball out to Davide Santon and Gutierrez stole between the Chelsea defenders to head home.

The goal marked a period of Newcastle dominance but that changed 10 minutes after the break when Lampard picked the ball up 30 yards from goal and arrowed it into the top corner to reach double figures in the Premier League for the 10th consecutive season.

Mata's finish was equally exquisite, as he received substitute Fernando Torres's lay-off to curl past the stretching Krul and give the Blues the lead.

Chelsea looked to be coping well without Ba, but Newcastle remained a threat on the break and from Gouffran's surging run they equalised, his shot parried as far as Sissoko, who turned it in.

But the Frenchman saved his best for last, receiving Santon's cutback to beat Cech at his near post from 20 yards.

Even then Lampard could have levelled once more, but his shot was blocked by Steven Taylor as Newcastle's French revolution gained an added dimension.