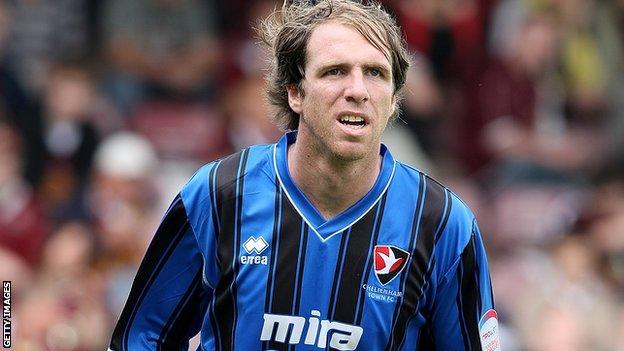 Cheltenham moved up to third in League Two with a narrow victory over Torquay.

Robins defender Keith Lowe broke the deadlock when he headed in his fifth goal of the season from Kaid Mohamed's corner.

The hosts doubled their lead after the break when Shaun Harrad turned and swept the ball past Michael Poke.

Torquay rarely troubled Scott Brown, but the Cheltenham keeper failed to keep out Rene Howe's soft shot on the half-volley late on.

Mark Yates's side should have sealed victory before Howe's goal, but Mohamed, Russ Penn and substitute Darryl Duffy all missed clear-cut chances.

It was a nervy finish for a new-look Cheltenham - who handed debuts to four players - but they held on for all three points.

Gulls manager Martin Ling was absent for the second consecutive match through illness, and his side slipped to 16th in the table.

"It took a little time for us to get into a stride, but that's what you get when you bring in new faces.

"I thought we looked strong and organised, we've bought in some good players on top of the ones we already have.

"I think the players responded in the right way and thought Kaid Mohammad played his best game in a while and Jermaine McGlashan stepped up all of a sudden.

"It's good to win because we needed that, it's just a pity we didn't get the clean sheet."

"First half we thought we did OK, second half, maybe not enough for us to get a result. We got a late goal but then huffed and puffed a bit.

"We were just a little bit loose in what we did. How we performed on Monday compared to today was disappointing in the second half.

"They got the ball forward and we had to deal with lots of aerial challenges. The ball was in the air quite a bit today, but I think we dealt with that generally.

"Three points from six against Exeter and Cheltenham isn't bad."