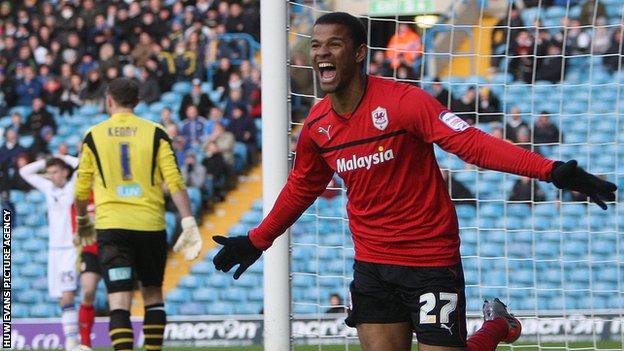 Debutant Fraizer Campbell scored the winner as Cardiff won at Leeds United to maintain their lead at the top of the Championship.

Campbell, signed from Sunderland, scored with his first touch after coming off the bench, turning in Craig Bellamy's shot.

David Marshall made two good saves in either half to deny Ross Barkley and Tom Lees.

Cardiff are now 10 points clear at the top after a fifth successive away win.

Cardiff made a positive start and from their first attack Paddy Kenny was forced to tip Aron Gunnarsson's lobbed cross over the bar.

Kenny and opposite number Marshall had very little to do for most of the first half as the game failed to find its flow.

Marshall was finally called into action to block a close range shot from the unmarked Barkley following a flick on from Diouf's cross.

During a first half in which chances had been at a premium, Bellamy did put the ball in the back of the Leeds net in the closing minutes.

The Wales striker poked the ball past Kenny from Tommy Smith's flick on but the goal was ruled out for offside.

Leeds last defeated Cardiff with a 1-0 away victory in the old Second Division in February 1984, five months after achieving a similar result at Elland Road.

Leeds started the second half brightly but Michael Brown's effort from outside the area following Diouf's corner went high and wide.

For the visitors, Kim Bo-Kyung created an opening for Tommy Smith but the ex-QPR player sliced his ball wide from six yards.

That proved to be Kim's final contribution as he was replaced by Campbell, making his debut off the bench following his move from Sunderland.

And Campbell made an immediate impact within two minutes of his introduction when he broke the deadlock with his first touch on 64 minutes.

Bellamy pounced on a mistake in the area by defender Sam Byram and Campbell directed the ball past Kenny from six yards.

Leeds rallied after falling behind with McCormack curling a 25-yard free-kick over the crossbar, before Rodolph Austin's shot was blocked by Andrew Taylor.

As they searched for an equaliser, the home side introduced one of their own new additions, Habib Habibou, to the action in place of Diouf with 18 minutes remaining

They piled on the pressure with Byram's header blocked by Mark Hudson then Marshall saved brilliantly to keep out Lees' point blank header.

The defeat ended a run of six successive home league wins for Leeds while Cardiff are 10 points clear of second placed Leicester.

"It is a cruel game sometimes. Everything about today was cruel. We missed open goals and the young lad (Byram) made a schoolboy error.

"I thought Mike Dean was brilliant but he didn't see the handball, when we all appealed, because he was in a bad position and should have been in a better one.

"He had three or four bodies in the way. The linesman could have helped him out, but they don't, do they. Then there was another handball in the 93rd minute that wasn't given."

"I've never had an easy game at Elland Road in my life and we knew it would be tough today, especially as they had an incredible, very well deserved win against Spurs last week.

"But we applied ourselves really well. David Marshall made an excellent save for us in each half and I will take limiting Leeds to two chances at Elland Road."