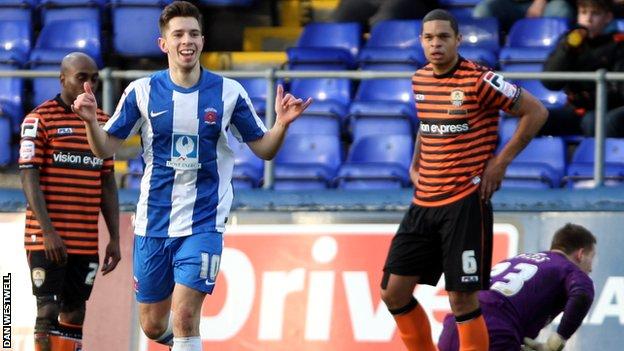 Peter Hartley and James Poole formed an appropriate scoring combination as Hartlepool secured only their second home League One win of the season by beating Notts County.

Poole put the hosts ahead from close range, from a Jonathan Franks pass.

It is the first time Hartley and Poole have combined to score for the third-tier's bottom side.

Defender Hartley has netted eight league goals for the north-east club since arriving from neighbours Sunderland in July 2009, while forward Poole has struck 10 times in his 63 appearances.

Hartlepool have won their last two matches after last weekend's victory at Portsmouth and are now eight points adrift of safety.

The Magpies have now lost two of their last three matches on the road - this coming on the back of a 22-game unbeaten away run.

"We didn't start well, we started slowly. A few of the players in the dressing room thought because of Hartlepool's place in the league, it was a case of just turning up.

"We did our best to make sure that wasn't our mindset, but we are disappointed with the way we started the game.

"Between the 18-yard boxes we did well. We got the ball down, passed, moved and caused them problems - more so second half."