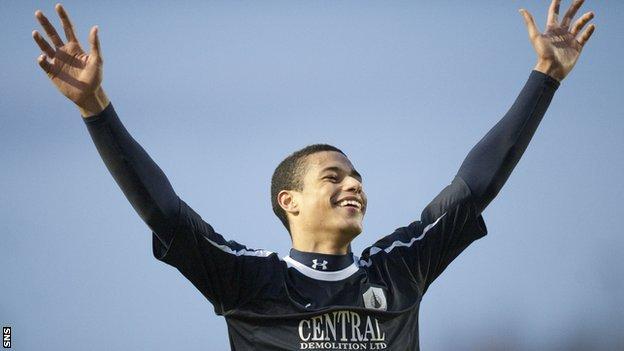 Lyle Taylor scored twice as Falkirk secured a place in the quarter-finals of the Scottish Cup by beating Forfar.

Taylor fired the Bairns in front from eight yards in the 19th minute.

But Iain Campbell levelled from the penalty spot two minutes later after Stephen Kingsley had fouled Ross Campbell in the box.

Stewart Murdoch headed Falkirk back in front after the break and David Weatherston netted before Taylor completed the victory.

Taylor's brace took his tally for the season to 22 in all competitions, his first a close-range finish following good work from Blair Alston.

Seven minutes later, Weatherston gave his side a two-goal cushion with a low shot into the bottom corner from 12 yards.

And Taylor added his second seven minutes from time with a close-range volley from Higgins' cross.

"The pitch is like a cow-field, it really is and I thought we handled it brilliantly.

"At times the ball was bobbling up and there were mis-placed passes but I told them to keep on doing the things we preach and trust in our style of play.

"It was a cup final for Forfar and were were aware of that. There is a real determination about our group.

"We go to the last four in a national cup competition last year and we are just one game away from that again."