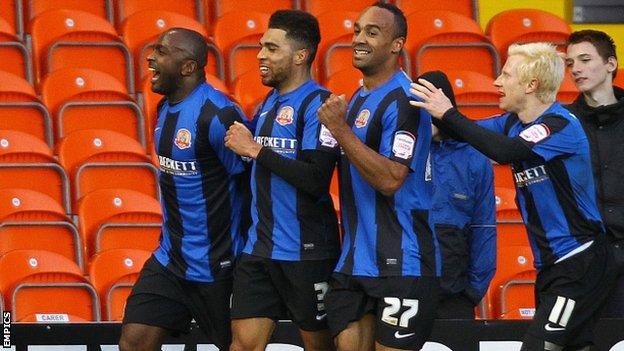 Jim O'Brien scored the opener midway through the first half when he slotted in after good work by Marlon Harewood.

But Tom Ince equalised as he smashed a 20-yard shot past Barnsley goalkeeper Luke Steele.

However, Blackpool were reduced to 10 men when Matt Gilks was sent off for handling outside the area before Jason Scotland prodded in a late winner.

The forward, who scored on his Tykes debut in last weekend's 2-0 win over Millwall, came off the bench again to convert past Blackpool's substitute goalkeeper Mark Halstead, at the second attempt.

Blackpool had created several opportunities to take the lead.

But a Blackpool corner led to Barnsley taking the lead as Martin Crainie's clearance fell to Harewood, who burst through two challenges before releasing O'Brien, who finished past Gilks.

Chris Basham should have equalised with a header and defender Craig Cathcart's brilliant 20-yard volley missed the Tykes goal by inches.

But Ince made it 1-1 in the 55th minute, firing home after an incisive passing move involving Tiago Gomes, Taylor-Fletcher and Stephen Crainey.

Ten minutes later, Blackpool had Gilks dismissed as he handled outside the penalty area as he tried to deny Chris O'Grady, who was through on goal.

The hosts nearly took a late lead but Steele pushed a 25-yard effort from Matt Derbyshire on to the crossbar, before Scotland scored the Tykes' winner in the 88th minute.

Their victory means Barnsley are now just two points behind 21st placed Wolves, who were beaten 2-1 by Leicester on Thursday.

"It was probably the hardest game of the season, but the lads have dug in and got the result.

"I've not set any targets yet, that's not really my style, we just have to worry about ourselves.

"We've just got to continue concentrating on what we do and now worrying about others. If we carry that on we'll get out of trouble."

"I can't ask for any more from the players.

"It was disappointing for me that the two Barnsley goals came about following our corners - that certainly doesn't help you - but the sending-off changed the whole complexion of the game.

"I've spoken to Matt Gilks and he had a real decision to make. He came out to meet the lad, the ball has hit his rib and then struck his arm but he certainly didn't mean it."