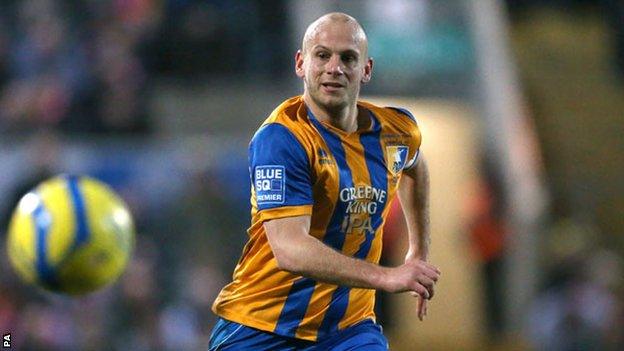 Mansfield won their third successive game and five different players got on the scoresheet as they climbed to within one place of the play-off zone.

Adam Murray set the tone by scoring a fifth-minute opener from 25 yards.

There were no more goals until the second half when Anthony Howell made it two after good work by Luke Jones, who headed home the third from close range.

Matt Green then scored from the left-hand side of the area before Lee Stevenson's penalty completed the rout.

"We put in a good performance. Credit to the boys, we looked sluggish early on but second half we were excellent.

"We played some great stuff. The passing and moving for the fourth goal was of the highest level, so I'm pleased for the boys.

"The way that they moved the ball about and the desire to ram the words down my throat was evident. I thought it was an excellent second-half performance."

"They played very very well second half, but first half we bossed the game completely - we should have gone 1-0 up. We bossed the first half and thought we could get something out of the game.

"The story of the game was in the two boxes. They were better in our box than we were in their box, it's as simple as that.

"I'm disappointed we lost three points but when the scoreline says 5-0, that's this league.

"We had a go, we've been beaten by a strong side who do the basics well, but we had our chances at crucial times and they've got to go in."